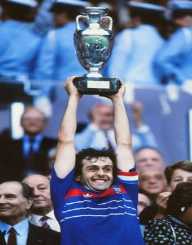 Michael Francois Platini was born on June 21, 1955, in Joeuf, Lorraine region in France. His ancestors came from Italy and settled in France during First World War. Platini started out his career in AS Nancy club.

Michael played at the 1969 young footballer’s competition but performed poorly. He attracted the attention of football club, Metz, after his performance in coupe Gambardella tournament. Platini was 16 years old at the time, but he acquired an injury and could not try out.

Michael Platini returned to regional league football and played with Joeuf. During this time, Platini had to take a breath test and him fainter. The doctor’s concluded that his breathing difficulties and weak heart will not allow him to play. After this, his dream of playing for his favorite boyhood team ended and Platini joined his father’s club Nancy in 1972. He was a reservist for Nancy and became friends with the goalkeeper Jean-Michael Moutier.

Michael Platini’s career with Nancy turned out to be successful. He had impressive passing and free-kick skills, which led the team to Ligue 2 championships in 1975. The same year, he also played in the national team and helped France to reach quarterfinals at the Olympics. In 1976 and 1977, Platini was named the French Footballer of the Year.
In 1979, Platini joined AS Saint-Etienne. He led the team to the victory of Ligue 1 championships. He also played at the 1982 World Cup with the national team, which reached semifinals.

In 1982, Platini moved to the prominent Italian club Juventus FC. His first season, Platini led the team to Italian Cup championships. For his performance, he won the Ballon d’Or Award, which he also won for the two next years. In 1984, Juventus won the Serie A title. The same year, he made an unforgettable performance with the national team at 1984 European Championships.

At the 1985 European Championships, France won over Liverpool. The national victory was marred by the deaths of 39 fans from a pregame stampede. In 1986, Michael Platini and Juventus won the league title and also led Les Bleus to the semifinals of World Cup. Platini retired from his professional football career in 1987. During his career, Platini had scored 312 goals, 580 career club matches and 41 goals over 79 international appearances for France.

After retiring from his professional football player status, Michael Platini took over the role of the national team’s coach. In 1988, he led the team to a stretch of undefeated play, but then the team lost the first round of 1992 European Championships and Platini retired from his position. Afterward, he became the co-president of the FIFA World Cup Organizing Committee for the 1998 World Cup, which took place in France. In 2007 he was elected the Union of European Football Associations president, and in 2011 was re-elected. Platini was voted to the English Football Hall of Fame and Italian Football Hall of Fame.