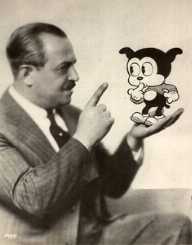 Max Fleischer was born on 19th July 1883, to Aaron and Malka Fleischer. Max Fleischer was born in Poland, and he was one of six children. The family moved to the United States in 1887, settling in New York City. Fleischer's father was a tailor and carved himself a successful career with clients from the upper echelons of New York high society. Fleischer’s childhood was comfortable. Unfortunately for Max Fleischer, his father lost his business some years later, and through his teen years, Fleischer grew up in a Jewish ghetto in Brooklyn.

Fleischer had the will to succeed, and he continued his education at evening school. He studied commercial art and took formal art instruction. He then studied at The Mechanics and Tradesman’s School in Manhattan.

Fleischer's first job was at The Brooklyn Daily Eagle. He started at the bottom as an errand boy but quickly worked his way up through the ranks until he became a staff cartoonist. His cartoon strips were called Little Algie and S.K. Sposher. It was during this time that Max Fleischer met John Randolph Bray. On Bray’s recommendation, Max Fleischer became a technical illustrator for The Electro-Light Engraving Company, based in Boston.

He then because a catalog illustrator for the Crouse-Hinds Company, and 12 months later, he was the art editor for Popular Science magazine. Commercially animated cartoons started appearing in the cinemas around 1914, but they weren’t very realistic, with the characters having jerky movements.

Max Fleischer invented the Rotoscope, which enabled him to product the first realistic animation. His patent was approved in 1917. He worked with his brothers Joe and Dave to test filming of animations. Dave had been working with the Pathe Film Exchange for several years, and due to his connection, Fleischer was offered a production opportunity. His first film was rejected, and shortly after this he once again crossed paths with Bray. Bray was working with Paramount at the time, and Fleischer went to work for him as a production supervisor. Shortly after, World War I broke out. Fleischer produced training films for the Army, and after the war finished, he returned to Bray to produce movies once again, both feature films and educational films.

In 1921, Fleischer and his brother Dave established Out of The Inkwell Films. Max Fleischer had created an animated character, Ko-Ko the Clown, that was drawn by himself by dipping his pen in an inkwell and drawing the animated character. It was unique to have the live action of Max Fleischer combined with animation that enabled the series to become successful. Fleischer had hired employees, and his second hire, Art Davis became what would be known in the industry as an “inbetweener.” The entire industry had staffers in this position by the 1930’s. His next invention was the Rotograph, and this was followed by Follow the Bouncing Ball, a technique that was used to guide viewers to sing along with songs that were being sung in the cartoon, with words across the screen.

In 1924, he teamed up with three others to create Red Seal Pictures Corporation. He filmed his Ko-Ko Song Car-Tunes, 36 in total, before the company went into bankruptcy in 1927. Fleischer was then offered a contract to product cartoons for Paramount. Due to the bankruptcy, his Inkwell series was renamed and was shown from 1927 to 1929. Alfred Weiss, who’s picture studio had formed the contract with Fleischer in relation to Paramount, was being mismanaged.

The Max Fleischer left the studio, and Inkwell Films filed for bankruptcy in January 1929. By March of the same year, Max Fleischer had established Fleischer Studios, Inc.

The new company started off well. Fleischer was producing educational movies, and he had also renegotiated a contract directly with Paramount.

One of Max Fleischer's biggest characters, without doubt, was Betty Boop. She made a cameo appearance in another animation, and she was so successful she was developed into her own cartoon. The Betty Boop series debuted in 1932. Max Fleischer and his studio were sued by the singer, Helen Kane, who the character was based on. She claimed the character had created unfair competition and had ruined her career. She lost the case.

Max Fleischer's second most famous character, was Popeye the Sailor. Popeye first appeared in a Betty Boop cartoon. He became an instant success, and by the late 1930’s was said to be even more popular than Mickey Mouse.

Fleischer continued producing his animations for Paramount, although as it turned out, Walt Disney had a four-year exclusivity for one of the color processes for animation, which left Max Fleischer on the back foot. This was due to several financial restructures at Paramount.

Due to the popularity of Popeye, the studio was under immense pressure to produce more cartoons. The company underwent rapid expansion, which created crowded working conditions. Max Fleischer Studios had a five-month strike take place in May 1937, much to the dismay of Fleischer.

His animations were not released until November. Fleischer and his brother Dave moved the studios to larger space in Miami, Florida. Shortly after this, the relationship between Fleischer and his brother deteriorated. Max Fleischer Studios and Paramount went into a joint venture with the production of Gulliver’s Travels. The budget and timing were both miscalculated, and instead of costing $500,000, the film ended up costing $1.5 million.

Fleischer Studios had to pay a penalty of $350,000, and they were not part of the foreign earnings once the film was released internationally. This was the beginning of their financial problems. In 1940, Paramount and Fleischer lost further revenue when they released animations that failed. These had been under the direction of Dave. Paramount wanted another animation for their Christmas release in 1941, and the movie was called Mr. Bug Goes to Town. When it was released, the exhibitors rejected it. Two days after the preview, Pearl Harbor was bombed. The release was canceled, and Fleischer was asked to resign. His brother, Dave, had resigned some weeks earlier. Following this, Fleischer joined The Jam Handy Organization as its Head of Animation. His departments created training films for the Army and Navy.

In 1953, Max Fleischer left the company and went back to Bray Studios as the Production Manager. Fleischer sued Paramount because they had taken his name off the credits of his movies. He won his case. In 1957, Fleischer re-launched Out of the Inkwell Films, Inc and he was joined by Hal Seeger, who had previously been his animator. They produced 100 color cartoons for television. Fleischer had also lost ownership of Betty Boop and spent the rest of his life trying to get it back.

Max Fleischer married Ethel (Essie) Goldstein in 1905, and he was still married to her at the time of his death. They had a son, Richard, who became a film director.

Max Fleischer was a pioneer in the animated cartoon industry, even ahead of Walt Disney at the time. His inventions continually improved the processes of animating.

He created three of the most popular and well-remembered characters of all time – Betty Boop, Popeye, and Ko-Ko the Clown.