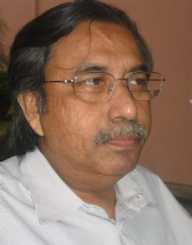 Shahabuddin Nagari was born on October 6, 1955, in East Pakistan (now Bangladesh). In 1983, he married Dr. Aftabun Nahar Maksuda. They have a son Rehan and Farhan.

Nigari studied in Dinajpur Bangla School and after second grade transferred to Dinajpur Zilla School. He later changed schools, and graduated from Shibnagar Primary School, later attending the Kansat High School. Nagari attended the Chittagong College, where he got admitted to the Zoology Department. He initially wanted to study English literature but decided to pursue a career in zoology because of the wishes of his family. In 1978, he graduated with Bachelor of Science with honors and continued with his Masters. His thesis was Rice Field Spiders in Chittagong, and Nagari graduated in 1980. After graduation, Nagari became a fellow at the University Grants Commission and focused on spider research.

In 1981, Nagari became one of the lecturers at the Chittagong University Zoology Department. At the same time, he also took the Bangladesh Civil Service examination and passed the test successfully. This allowed Nagari to be appointed as the Assistant Collector of Customs & Excise. He began his government work in 1983 and worked in several different offices in different positions and ranks. Nagari retired from government work in 2016.

Nagari was interesting writing since he was very young. During his time in village schools, Nagari began attempting to write rhymes. His uncle was a student at the Rajshahi University and organized weekly literary gatherings, where all the literary enthusiasts could join. His first rhyme “Ami Kobi”- “I am a Poet” was published in 1969 in the periodical MukulerMahfil. In 1971, he began to contribute with his writing to the weekly periodical Rajanigandha and began writing the children’s section in The Daily Michhil.

Besides writing for local Chittagong newspapers, Nagari wrote for children in almost all of the national periodicals in Dhaka. In 1978, he published his first book of rhymes Nil PaharerChhara. He started to write articles and poems regularly. In 1986, he published his second book Mahakaler Batighar and his collection of rhymes Mouly Tomar Chhara.

Nagari mainly writes romantic poetry as a reflection of his sensitivity. The main thought of his poems is love. However, he has also written about social issues and sadness of human life.

Nagari has been one of the main figures of the cultural sphere of Bangladesh. He is also a vocalist, songwriter, composer, scriptwriter and a playwright. Nagari studied modern and classical music at the Pakistan Cultural Academy, while he was still in 9th grade. As a student at Chittagong University, Nagari sang in almost all of the functions of the university.

After taking a hiatus from music, Nagari came back in 1994 and appeared in the BTV drama Keu Fere Keu Fere Na. In 1996, he released his first audio album Bishonno Mon. Until 2004, he published ten more albums and had sung more than 200 songs.