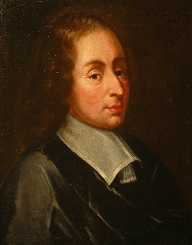 Blaise Pascal was a mathematician, Physicist, philosopher, and inventor from France. Pascal is much known for his contribution to the formation of the modern theory of probabilities. During his days, he made a lot of enormous contributions to various physical sciences and mathematical philosophies. Born and raised in an intellectually stimulating environment, he was portrayed as a child prodigy since his early days regarding intellectual brilliance.

Blaise Pascal attained knowledge and began working on various mathematical concepts and came up with numerical calculation machines when he was still a teenager. Also, he was a multi-talented and multifaceted individual, who had remarkable contributions in the fields of Christianity, writing, and came up with various inventions. In the area of Christian philosophy, he is mostly remembered for his theological work called `Pensees.’

Blaise Pascal was born on 19th June 1623 in Clermont-Ferrand, which an area called Auvergne region in France. His parents were Etienne Pascal and Antoinette Begon. His mother Begon died when he was just three years old. His father worked as a local judge and was part of the `Noblesse de Robe.’ Also, he loved mathematics and science education and was a talented mathematician. Pascal had two siblings named Jacqueline and Gilberte.

The family relocated to Paris in 1961, where Pascal was mostly brought up. There, they got a maid named Loise Default who eventually became a crucial member of their family.

Pascal's father Etienne noticed that his children possessed remarkable intellectual abilities, and began educating them. In particular, he paid more attention to Blaise who loved mathematics and science since these early days. Notably, he liked the theories on conic sections by Desargues. As a result, he came up with a short treatise called `Mystic Hexagram, Essay on comics’ based on the Conic sections, and sent it to Pere Mersenne in Paris. This marked his first mathematical work and is commonly known as Pascal’s theorem in the current era.

The work on the conic sections was intelligent, and Descartes himself was fascinated by it, and hardly believed that it was young Pascal who came up with it. At the time, Pascal’s father invested in the government bond that amassed a lot of finances for him. This enabled the family to live a lavish life, traveling around Paris.

However, in 1688, the government defaulted on the bonds to carry on with the war, dropping Etienne’s worth significantly. Hence, he strongly opposed the fiscal policies imposed by Richelieu, which caused him to flee Paris for security reasons. He left Blaise and his sisters under the guardianship of his neighbor. However, he was later pardoned when his daughter Jacqueline performed at an event attended by Richelieu.
Studies, Research, and Inventions

Blaise Pascal loved mathematics and had studied various concepts, some of which he researched and developed further. When he was 16, he came up with multiple theorems, for example `mystical hexagon’, which fascinated many mathematical thinkers, for example, Pierre Gassendi and Clyde Mydorge

. In 1942, Blaire noticed that his father performed a lot of tiring calculations and recalculation in his taxes job. Hence, he came up with mechanical calculator called Pascal’s Calculator. The device could perform additions and subtractions. In the subsequent years, he continued working and improving the calculator. The invention was inconsistent with the composition of the national currency at that time.

However, by 1645 Blaise Pascal had made a lot of significant improvements on the device. Regardless, it did not have a high number of sales since it was expensive.

In 1940, Evangelista Torricelli’s experimental work on bathometers came to his attention. As a result, he began the experiment on atmospheric pressure about weight. Through his experiments, Pascal verified Torricelli’s theories and enabled further studies in hydrodynamics and hydrostatics. Also, Pascal came up the syringe that inspired formation the hydraulic press and the instrument were based on the current Pascal’s law.

In 1963, Blaise Pascal made significant contributions to mathematics, whereby he came up with publication `Treatise on Arithmetical triangle’. The publication contained a treatise that explains conics sections regarding tabular presentations and binomial coefficients and is currently referred to as Pascal’s triangle.

In association with renowned mathematician Pierre de Fermat, Pascal studied gambling problems whereby the came up with the mathematical notion expected values and theories of probabilities. These approaches were crucial in the formation of Calculus during the succeeding years.

In 1654, Pascal gave up a lot of his mathematical work and turned to religious activities. Hence, Blaise Pascal began writing a lot on religious issues. He came up with an 18-letter series which was published in 1656, under a false name of Louis de Montalte. As a result of the publication, he ran out of favor with King Louis XIV since it criticized specific ethical method used by Catholics. In his final years, Blaise Pascal was working on various religious work and was writing an apology to Christianity but was not able to complete it.

-Blaise Pascal is accredited to development of the probability theory in association with Pierre de Fermat. The theory was initially relevant to gambling, but currently, it is the foundation of many studies, for example, actuarial science.
-Pascal invented the Pascalines or Pascal’s calculator. The device could perform addition, subtraction, and multiplication and division by repetition.
-He came up with Pascal’s law or `the principle of transmission of fluid pressure.’
- In 1970, his contributions to science were honored, and an SI unit of pressure was named after him and is referred to as the Pascal (Pa) unit

Being raised without his mother caused Pascal to become extremely attached to his father and sisters. However, he lost his father in 1651 and one of his sisters Jacqueline in 1661.

Blaise Pascal often suffered from health complications for most of his adult life. In 1962, his condition became worse, and he died on 19th August. The cause of death is believed to have been either stomach cancer, Tuberculosis or both.