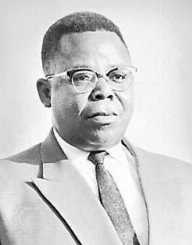 Joseph Kasavubu was the first President of the Republic of the Congo. He was born in the village of Kuma-Dizi in the Mayombe district of Lower Congo. His year of birth is disputed and is speculated to be between 1910 and 1915. At the time of his birth, Congo was under the colonial rule of Belgium. He is a member of the Yomba ethnic group. Kasavubu hailed from a successful farmer’s parentage. He was the eighth among the nine children of his parents.

Kasavubu's father was a well-to-do farmer and a self-reliant businessman. Hence, their family led a comfortable life. His father had a house built at the fringes of their village and had trade relations with the Angolan city of Cabinda. Kasavubu lost his mother when he was only four years old. His older brother took upon the responsibility of raising him. He sent Kasavubu to a Catholic mission near to their place. The Catholic missionaries baptized and converted Kasavubu's religion to Christianity in 1925. He then underwent some elementary schooling in the Kikongo language.

Upon attending a primary school in 1927, Kasavubu enrolled in a minor seminary in Mbata-Kiela. Minor Seminary was a type of residential-educational institute. At the institute, teenage students received academic as well as spiritual education. These types of educational institutes were deemed to be the breeding ground for the future Catholic priests. Kasavubu graduated from this institute in 1936. He learnt humanities and Latin in preparation for his future role as a Catholic priest.

In order to become an ordained priest, he further joined the Kabwe seminary in Kasai Province. His plan was to study a three-year course in philosophy and another five-year course in theology. The study of these subjects was necessary for him to qualify as an ordained priest. In 1939, on completion of his three-year undergraduate course, the Bishop of the seminary dismissed him. However, no one ever disclosed the reason for his expulsion from the seminary. In spite of his expulsion, the seminary authorities provided him with a teacher’s certificate.

He returned to his native place Mayombe soon after his eviction from the Kabwe Seminary. At the beginning, he began working as a bookkeeper in the local Kangu Mission. However, disgruntled with the meager remuneration, he appeared at the instructor’s examination. After passing the exam successfully, he took upon the job of a sixth-grade teacher at the school of the mission. He again changed his job and worked for an agricultural and logging company for around a year. In mid-1942, he joined the finance department of the Belgian colonial administration in Léopoldville in the capacity of a clerk. During his 15 long years of tenure here, he reached the position of chief clerk. This was the topmost level of employment achievable to a Congolese civil servant under the terms of the Belgian colonial rule.

Kasavubu began his journey as a political activist stealthily while still working under the Belgian colonial government. On March 21, 1954, he replaced the outgoing president of the ABAKO. ABAKO was an association for the Bakango tribal community. His association participated in the first open municipal election held in December 1957 in Léopoldville. Under his charismatic leadership and able guidance, ABAKO swept the election. Subsequently, he became the Mayor of the Dendale district of the city.

PRESIDENT OF THE REPUBLIC OF CONGO

In between mid 1950s to late 1960s, the gradual decolonization process of Congo by the Belgian colonial rulers gained momentum. Thereafter, Kasavubu was arrested on charges of inciting rioting and violence. He spent two months in jail. In 1960, the first general election of Congo was held immediately after the country gained independence. As both the main rival party could not claim an absolute majority on their own, they joined hands and formed an uneasy alliance. According to their agreement, Patrice Lumumba, the leader of the rival party will be the Prime Minister and Kasavubu will fight for the post of presidency against the mentor of ABAKO, Jean Bolikango.

With the backing of Lumumba in favor of Kasavubu, the latter eventually became the first president of the Republic of Congo. On June 27, 1960, Kasavubu was officially sworn in as the first President of independent Congo. He then presided over a series of weak governments for the next five years. On November 25, 1965, head of the army colonel Joseph Mobutu seized power militarily and ousted Kasavubu. As a result, colonel Mobutu established direct army rule on the newly independent country.

After spending some time under house arrest, Kasavubu proceeded to his farm in Mayombe to enjoy his retired life. He spent the last four years of his life at the farm and died in a hospital in Boma on March 24, 1969. His death signified the end of the first generation of Congolese politicians.