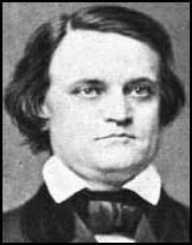 John C. Breckinridge moved to Frankfort to commence his law practice as Lexington was overcrowded with lawyers. However, John C. Breckinridge was unable to find an office there so moved to Iowa Territory with his friend Thomas W. Bullock in October 1841 and settled in Burlington, Iowa by the winter of 1842–1843.

While there, John C. Breckinridge became convinced to join the Democratic Party and was named the Democratic committee of Des Moines County in February 1843. John C. Breckinridge later moved to Kentucky to set up a law firm with Thomas’ cousin Samuel Bullock and moved to Georgetown after his marriage. The family later moved to Lexington in 1845 to form a law partnership with James B. Beck, future US Senator.

After officially joining the Democrat party in 1843, John C. Breckinridge got involved in political activities including campaigning for presidential nominee James K. Polk in 1844 campaign. He declined all initial attempts to convince him to seek political positions including clerk of Scott of County and Eighth Districts congressional seat in 1845. Breckinridge strong stance and pro-slavery ideology won him the first term at the Kentucky House of Representatives.

John C. Breckinridge helped in the formulation and adopting new amendments in the constitution on the issue of slavery. After his first term of office, John C. Breckinridge declined denomination citing personal issues. His son John Milton had died prior to the end of the first session in 1850. In 1851, John C. Breckinridge rather sought for election to the Congress from Kentucky’s Eight District. Breckinridge has fierce competition from Leslie Comb, who many tipped to win the election.

John C. Breckinridge became one of the 80 members of the House to retain their seats for the Thirty-third Congress. This time John C. Breckinridge was assigned to the Ways and Means Committee, but his expectation to serve as the chairman was shuttered as it went to another person. After serving his second term of office, Breckinridge was left with no hope of being re-elected since Owen County, which gave him man votes were replaced by Harrison and Nicholas Counties coupled with the rise of the Know Nothing Party. John C. Breckinridge, therefore, resigned to continue with his law practice.

John C. Breckinridge was unanimously voted for as a vice presidential candidate in the second round of election after polling 55 votes in the first round which placed him second. John C. Breckinridge actively joined the campaign of the presidential nominee James Buchannan and was able to win the election with 14 electoral votes over 114 of the Republican’s John C. Fremont and Know-Nothing candidates William L. Dayton who had eight votes. Breckinridge who was 36 years then became the youngest vice president in the United States history. However, his relationship with President Buchannan continued to strain and had almost no power.

During the 1860 Democratic National Convention in Charleston, South California, John C. Breckinridge he was nominated by his supporters to contest for the presidential candidacy but that went to Lincoln and at the end was elected as a senator. His disagreement with the unionist government and denouncing the Unionist state legislature coupled with and aimed to Confederate Kentucky and his sympathy for the Southern cause. John C. Breckinridge then enlisted in the Confederate army and was therefore indicted for treason in the U.S. federal district court in Frankfort on November 6, 1861, and was declared a traitor on of US on December 2, 1861, and expelled from the Senate.

John C. Breckinridge was married to Mary Cyrene Burch on December 12, 1843. The couple settled in Georgetown, Kentucky and had six children. His son, John Milton fell ill and died on March 18, 1850. Breckinridge died on May 17, 1875.