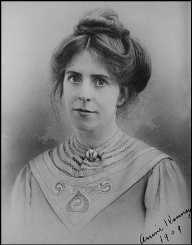 Annie Besant was a British women's rights activist. She also protested for the independence of two countries in the British Empire.

Annie Besant was born on October 1, 1847, in London, England. Her name at birth was Annie Wood. Her parents came from an Irish background. Her father died when she was five years old. Her mother had to start working to provide for her family.

Because Annie Besant found work at a boy's school boarding house, Annie Besant could not take Annie Besant with her. Not only did she get a strong education and a sense of independence, but she also got to travel throughout much of Europe.

After divorcing her husband, Annie Besant studied part-time at Birkbeck Literary and Scientific Institution. Annie Besant did not stay long as her political and religious views were controversial with the College Governors.

During her marriage to Rev. Annie Besant, there was always tension and disagreements. Even though they shared an interest in caring for the urban poor, her exposure to English radicals and political activists shaped her views. Not only did they conflict in issues around them, but also in their home. For example, Annie Besant wrote children's books and articles for which she was paid. However, her husband was able to claim the money earned as married women could not legally own property. Their ideology separated them further when she sided with farm workers wanting unionization and better working conditions. Annie Besant also questioned her faith, even refusing to take Communion. She left London with her daughter when there was no chance of reconciliation.

Annie Besant was very vocal and open about her views that were radical at the time. This included freedom of thought, secularism, birth control, worker's rights, women's rights, and Fabian socialism. She was a member of the National Secular Society and the South Place Ethical Society. Her writings transitioned from children's books to articles that her thoughts were questioning conventional thinking.

She wrote on a weekly basis in the National Reformer, the newspaper of the National Secular Society. She also gave lectures and speeches in favor of reform and freedom from the government. Annie Besant gained more recognition when she as Charles Bradlaugh, the founder of the National Secular Society, published a book on birth control titled Fruits of Philosophy. The book was so controversial that they were arrested, tried, and found guilty, but they won their appeal on a technicality. Even though they were able to defend their book, Besant lost custody of her children. When Bradlaugh was elected to parliament, he and Besant went separate ways.

During the 1880s, Annie Besant joined the Fabian Society with the help of her newfound friend George Bernard Shaw. The organization looked into spiritual alternatives to a capitalist system. She started writing for the organization.

On November 13, 1887, Annie Besant was scheduled to speak to a crowd of protesting unemployed workers at Trafalgar Square. When the policed tried to break up the demonstration, fighting broke out. In the end, 400 were arrested, 75 were injured, and one died. The event was later known as “Bloody Sunday.” Though she was not arrested, she worked to provide legal aid and support for the arrested workers and their families. Annie Besant was also involved in the London matchgirls strike in 1888. With public support, young women of the match factory gained improved working conditions and better pay. She did the same for the London Dock Strike.

In 1888, Annie Besant was elected to the London School Board, a bold step for women who wanted to take part in local elections. That same year, she converted to Marxism after years of friendship with Edward Aveling who was part of the Social Democratic Federation. However, in 1889, she did some research on The Secret Doctrine by H.P. Blavatsky. After meeting the author in Paris, she chose to convert to Theosophy in her search for a more spiritual dimension. As Annie Besant moved away from the Fabian Society and Marxism, she embraced her new faith and joined the Theosophical Society. She became one of the national leaders, even representing the society at the Chicago World Fair in 1893.

That same year, she also traveled to India and gave her support for their freedom and independence. In 1908, she became the president of the Theosophical Society. As president of the society, Besant worked on bringing more focus to the teachings of the Aryavarta. She did this by establishing schools such as The Central Hindu College for boys in Banaras. With Pandit Madan Mohan Malaviya, they worked to create a common Hindu University. The Banaras Hindu University was established in 1917 with The Central Hindu College as the first constituent college.

While in India, Besant was active in national politics. In 1917, she was the first woman President in the Indian National Congress. She was also the editor of the New India newspaper. When she was arrested for protesting British rule in India, many of the nationalist groups protested, and she was released. The unity was a step closer to self-governance and Indian nationalism. Besant continued her support for Indian independence and theosophy until her death.

Annie Besant married Reverend Frank Besant in 1867. The couple had two children. Together they work to help the poor. However, they divorced in 1873 as her political and theological views changed away from secular religion. Annie Besant died on September 20, 1933, in Adyar, India at the age of 85. Not only was she one of the leaders of worker's and women's rights in her native England, but she left her mark in India as well.

Her legacy lived on with other civil rights leaders including Mohandas Gandhi, one of the leaders who called for her release from jail. Annie Besant School Allahabad was named in her honor as was the Besant Nagar neighborhood in Chennai. Throughout her life, she wrote many articles, pamphlets, and books that emphasized her beliefs. They educated and supported her positions, especially regarding women and faith.

From her early days, Annie Besant supported the poor and the workers. She spoke up for better working conditions, better pay, and a better quality of life for all.