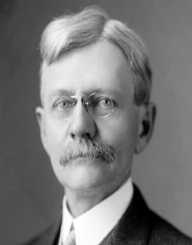 Thomas R. Marshall He was an American lawyer and politician who served as Indiana State governor and vice president of the US.

Thomas Riley Marshall was born to Daniel and Martha Marshall on March 14, 1854, in North Manchester, state of Indiana. Marshall started his education in a public school in Pierceton, Indiana. He moved with his family to Fort Wayne where he continued with his high school education. He graduated from high school in 1869. He enrolled at Wabash College and graduated in 1873. He apprenticed at the law firm of Walter Olds in Columbia City. Marshall was admitted to Indiana State bar association in April 1875.

In 1876 he opened his legal office in Columbia City. In 1879 he partnered with William McNagny. In 1880, he ran for the office of the District Attorney and lost. He lost his father and stayed with his mother until 1894. Upon his mother’s death that year, Marshall inherited the entire family fortune. He practiced law through his company for 35 years.

In 1908, Marshall went for the Democratic primaries for the Indiana state gubernatorial seat. He won the vote through the support of workers unions and the anti-liquor movement in the state. He faced the Republican candidate James Watson in the ensuing elections. The Republican Party was embroiled in an internal power struggle. The lack of coordination during the campaign proved fatal. Marshall, who was considered an outsider, surprisingly won the seat with a tight margin of 48.1 percent to Watson’s 48.0 in the final count. He became the 27th governor of the state and the first Democrat in twenty years. He took office on January 11, 1909.

As the governor, Marshall became a progressive politician. He abolished child labor, enacted anti-corruption laws, fought the rampant sale of liquor, and improved taxation laws. He became the first US state governor not to sign off a death execution in while in office. Despite his spirited effort, he lost his bid to institute a progressive constitution in the state.

Marshall opted to run for Indiana Senatorial seat in the 1912 elections having ended his official term as governor. The Democrat top party operatives suggested his name or the presidential ticket. He lost his bid to Woodrow Wilson after intense party lobbying. Wilson accepted Marshall as his running mate. Initially, Wilson rejected Marshall as a political outsider in national politics. After the political calculations, Indiana won the stakes as a swing vote state. Marshall became the party’s choice. The Democrats won the 1912 elections with a sound majority beating the Republican duo of Theodore Roosevelt and Hiram Johnson.

Despite the win, the animosity between the two continued to the White House. Marshall raised opposition to the president for the lack of support in the implementation of his ideas. In 1913, Marshall did the unconventional route. He began meeting selling his ideas to individual members of the national senate. He presided over Senate meetings with high handedness. Marshall got his way in most of the deadlock votes in the Senate. His style of leadership earned him a radical tag. Some colleagues saw it as a way of stamping his authority against his boss, President Wilson. President Wilson took advantage of Marshall’s machinations within the political scene to win reelection with a reduced margin. They became the first duo to be reelected into office in 96 years.

In his second term as vice president, Marshall continued with his love-hate relationship with President Wilson. He opposed the involvement of the US military in WW1. When President Wilson rooted for the war, Marshall reluctantly supported it. President Wilson kept Marshall in the dark in nearly all operations of the war. Marshall was given the task of encouraging US citizens to buy government bonds to help secure the economy during the war.

Like before, Marshall was kept in the periphery about the president’s deteriorating health. He learned of the progress of the president in newspapers. The US Secretary of State Lansing mounted a campaign for Marshall to assume the presidency. At the beginning of December 1919, Lansing confirmed to Senate that the cabinet had not seen the president in two months. Wilson recovered for his stroke but remained out of the public for most of his term in office. Marshall left politics in 1920 after failing to garner the support of the party for a presidential bid.

Marshall died of a cardiac arrest on June 1, 1925, in the US capital. He was buried in Crown Hill Cemetery in Indiana. He was survived by his wife Lois and no children.

He is hailed as a statesman for nit assuming office when Wilson was incapacitated. Marshall is seen as a villain for not helping the allies in WW1 and his passive acceptance of the League of Nations ratification.