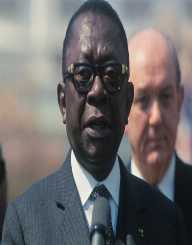 William Tubman served as the Head of State of Liberia for two decades. It was during his tenure that Liberia developed into a modernized country. Hailing from a decent background, William Tubman made sure that Liberians were at peace both economically and politically. As a result, political upheavals and uprisings weren’t the order of their day. William came to define peaceful treaties at its best. It wasn’t by chance that his father saw him as a leader since inception. But he came to thank him for his authoritative rules. His father was sure that he would come to have an envied life. Let’s see whether he lived with regrets or satisfaction.

William Tubman main strength was a unique character that he displayed. It is one trait that highlighted his other side of being a sincere and straightforward being. Above all, William hated to employ negative thoughts in his life. As a result, he continued to build a firm foundation in regards to his career. He was the kind of person who treasured his positive attitude, and in the end, life gave him lemonade. At his best Tubman was known as a friendly and dependable man who also wanted the best for others. Read along.

On 29th, November 1894 a duo, Elizabeth Tubman and Alexander Tubman were blessed with a son in Harper, Liberia. He was none other than William Tubman who liked to play with his siblings. Alexander served as a Reverend and also a leader of the Liberian army. As he continued to grow up, William Tubman came to know the real definition of discipline and respect. His father was known as an authoritarian. It came to a point where he forced his children to have a nap on the floor simply because the beds hardened them to grow as he thought. He was taken to the Methodist Cape Palmas Seminary and later to Harper County High School. In the mid of 1910, at 15 years old, William enrolled in the Liberian army. For seven years, he served as a military officer.

During his teenage years, William Tubman wanted to become a liable preacher just like his father. It was at the age of 19 that he was named as a divine proclaimer. While still; serving at his father’s church, William self-taught himself law. At 23 years old, he passed a law assessment called bar examination. After a while, William went to Maryland where he joined a Probate Court as a tax collector and a high ranked army officer. It was at 28 years of age that William entered the political world. In the mid of 1923, he got a seat in the Senate of Liberia. He then reinstated his position after winning the re-election. Afterward, he was appointed as an adviser of Allen Yancy, who acted as the Vice President.

William Tubman opted to resign from his Senate seat where he joined the League of Nations. While still in the organization he took the time to defend Liberians from torture and slavery. It was in 1934 that he got his seat back where he served for three years as a Liberia Senate. He then resigned in 1937.It was the same year that he was appointed as an associate justice of Liberian Supreme Court. Early in 1942, William Tubman vied for the presidency where he surpassed five candidates. He took office on 4th, May 1943 as the nineteenth President of Liberia. He remained in the seat for over a decade.

William Tubman played significant roles during his serving as the President of Liberia. It was during his tenure that he came up with a unifying policy called National Unification Policy. It was the only system that led to the growth and development of Liberia including employment and infrastructure. He also managed to bring up several investments that positively resulted in the growth of Liberia.

William’s wife was called Antoinette Tubman with whom he had four children. He breathed his last on July 23, 1971, in London. As a trivia, William Tubman acted as an active member of Africa-American branch in Liberia.