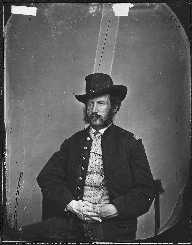 John Wilkes Booth was the actor who assassinated President Abraham Lincoln at Ford's Theatre in Washington, D.C. on April 14, 1865.

John Wilkes Booth was born on 10th of May 1838. His parents were noted English Shakespearean actor Junius Brutus Booth and his mistress Mary Ann Holmes Junius’ was granted a divorce in 1851 on the ground of adultery by his wife Adelaide Delannoy. His parents legally wed the same year. He was the ninth of ten children and was named after the radical politician John Wilkes
John Wilkes Booth attended Bel Air Academy and was skilled at horsemanship and fencing. For a year in 1850, John Wilkes Booth attended the Quaker-run Milton Boarding School for Boys located in Sparks, Maryland. There John Wilkes Booth learned classical works by Cicero, Herodotus, and Tacitus. After that he went to St. Timothy's Hall, an Episcopal military academy in Catonsville, he subjected to a regimen of daily formation drills and strict discipline His father died when he was fourteen, and he left school.

John Booth's mother was Episcopalian, while his father was a person who was open to the teachings of any religion. John Wilkes Booth was baptized in 1853, at St. Timothy's Protestant Episcopal Church. Sometime later, he had converted to Catholicism as he had a Catholic medal on his person when he died.
John Wilkes Booth became a delegate for Know Nothing Party for Henry Winter Davis in

Bel Air. John Wilkes Booth was sixteen when he became interested in theatre as well. The party had an anti-immigrant stance. Henry was trying to get into Congress in the 1854 elections. John Wilkes Booth began practicing elocution daily in the woods around Tudor Hall and studying Shakespeare.

When John Wilkes Booth turned 17, John Wilkes Booth made his acting debut in Baltimore, with a supporting role as the Earl of Richmond in Shakespeare's Richard III. Despite his initial fumble, his good looks and energetic performance made him a sensation. John Wilkes Booth joined Arch Street Theatre in Philadelphia, in 1857. From 1859 to 1860, John Wilkes Booth was touring around the country. He was forced to take medical leave after suffering from respiratory illness in 1863.

John Wilkes Booth invested his money in various enterprises during the early 1860s. Those included land speculation in Boston's Back Bay section and oil. He withdrew from the oil business in 1864 with a loss.

In 1859, John Wilkes Booth showed his support for slavery by joining a Virginia militia, Richmond Grays. During the Civil War, John Wilkes Booth became a secret agent for the Confederacy, using his ability to travel to smuggle the anti-malarial drug quinine, as it was in short supply due to the Northern blockade.

John Wilkes Booth blamed Abraham Lincoln for the war and all of the South's troubles, so John Wilkes Booth had begun a plot to kidnap the President. His plan was to exchange the President for the release of Confederate Army prisoners of war and to force recognition of the Confederate government. On March 17, John Wilkes Booth learned that Lincoln would be attending a performance of the play Still Waters Run Deep at a hospital near the Soldier's Home. He assembled his team of six for the attempt but the President changed his plans at the last minute.

Rise To Stardom: The Assassination

When John Wilkes Booth learned that the President and Wife will be attending the play Our American cousin on the evening of April 14, 1865, John Wilkes Booth put his assassination plans into motion.  As he was a well known actor, he had access to all parts of the theater to make necessary arrangements. John Wilkes Booth obtained a getaway horse with livery stable owner James Pumphrey, paving an escape route. John Wilkes Booth assigned co-conspirators Powell to assassinate Secretary of State William Seward, and George Atzerodt to kill Vice President Andrew Johnson. David Herold would help with the escape to Virginia.

At ten o'clock that evening, John Wilkes Booth slipped into the President’s booth and shot him at the back of his head via a 0.41 caliber Deringer. John then jumps from the President’s box to the stage to deliver his last line, "Sic Semper Tyrannis" (Thus always with tyrants) with his knife raised. It was unclear how John Wilkes Booth injured his leg, but he managed to escape to get across the Potomac to Virginia on April 22. Aided by some Confederate soldiers, John and David Herold hid themselves at Richard Garrett's farm near Bowling Green.

John Wilkes Booth was the only assassin to succeed in the plan, as Powell badly wounded the Secretary of the State but he survived. While Atzerodt lost his nerve and never made an attempt to kill Vice President Johnson. John Wilkes Booth later learned that the Southerners feared that the North would take revenge on the defeated former Confederate states and his deed was considered the worst possible tragedy in the country. By April 20, John Wilkes Booth learned that his co-conspirators were already arrested: Mary Surratt, Powell, Arnold, and O'Laughlen.

On April 26, 1865, John Wilkes Booth” Corbett found his quarry: JJohn Wilkes Booth and David Herold, who had been hiding in Richard H. Garrett's farm in Port Royal, Virginia. John Wilkes Booth refused to surrender so was shot at the neck by Corbett, and was paralyzed as the barn blazed. The bullet had pierced three vertebrae and partially severed his spinal cord. John Wilkes Booth died three hours later on Garrett’s family porch. After confirming his identity, John was buried in the family plot at Green Mount Cemetery in Baltimore.

On June 30, 1865, Mary Surratt, Lewis Powell, David Herold and George Atzerodt were found guilty in Lincoln's assassination by a military tribunal in Washington, D.C. They were hanged in the Old Arsenal Penitentiary on July 7. Other members Samuel Mudd, Samuel Arnold, and Michael O'Laughlen were sentenced to life imprisonment at Fort Jefferson. Edmund Spangler was given a six-year prison term. While Michael O'Laughlen died in yellow fever in 1867, the others were pardoned in February 1869 by President Andrew Johnson.