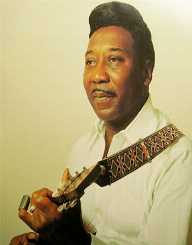 Muddy Waters was born on April 4th, in 1915. He became famous for his exceptional musical talent, particularly in the blues genre. Due to his interest in blues, he got the nickname "father of modern Chicago blues." The surrounding environment in Delta region deeply influenced waters. Alan Lomax, a music archivist, was the one who initially recorded his music. After moving to Chicago during the 1940s, Waters began performing in clubs. With time, he landed himself a record that would turn his career into a success. Some of the hits that he released during this time include "Rollin' Stone" and "I'm Your Hoochie Coochie Man."

McKinley Morganfield alias Muddy Waters was born on April 4th, in 1915. His place of birth was in Rolling Fork, Mississippi. However, rumor has it that he might have also been born initially around Jug's Corner in Issaquena County. Waters earned his nickname “Muddy Waters” because as a boy he played music close to muddy swamps in Mississippi River. His father was called Ollie Morganfield. He worked as a farmer. Aside from this, he also played the guitar which could be part of the reason why Waters grew to become just like his father. Unfortunately, Ollie, his father, left them when Waters was still a toddler. Sadly, Waters lost his mother at the age of three. As a result, he was raised by Delia Jones, his grandmother.

When Waters clocked 5, he developed a strong interest in music and began playing the guitar. He was naturally talented, and by the age of 17, he earned himself his first guitar. Charley Patton, one of the Mississippi blues legends, became his early inspiration for blues music.

Waters also spent some time working in cotton plantation farms as a sharecropper. This did not affect his music career as he often found time to entertain people with his unique taste in music. In the early 1940s, things improved as he joined Silas Green Tent Show. This gave him the opportunity of traveling around. The more he traveled the better he got. This also motivated his desire to play blues music to his audience. Around this time, the likes of John Work and Alan Lomax came across the works of Waters and grew interested. As a result, they convinced him to make his first recording.

Early recordings to be done by Waters were "Feel Like Going Home" and "Can't Be Satisfied."

In 1943, Muddy Waters made up his mind to venture into the world of growing music in Chicago. Here, he went to live with his uncle. In 1944, his uncle gave him an electric guitar as a present. This guitar not only shaped his music but it also revolutionized the contemporary blues music in Chicago to match with the urban vibe.
Waters also had to mix his music career with different jobs to sustain his income. He worked at a paper mill factory during the day. When night time came, he rocked the city with his blues music. It only took him three years before he was famous all over. His popularity gave him the opportunity of recording with big records label names such as Aristocrat, Colombia, and RCA.

At first, the recordings that Waters made with Aristocrat brought little fame to his side. However, things turned around after the recording company changed to Chess Records. He quickly rose to become a talk of the nation releasing hits such as "Got My Mojo Working," and "I'm Your Hoochie Coochie Man." Meanwhile "Rollin' Stone" became immensely popular to the extent that it was adopted as a name to a music magazine. Moreover, the name was also adopted by a renowned rock band. This signified the level of impact that his song had on his fans.

In mid-1979, Muddy Waters tied the knot to Marya Jean Brooks. Together, the two were blessed with five children.

Muddy Waters passed away on April 30th, in 1983. His cause of death was as a result of a heart attack that he succumbed to.