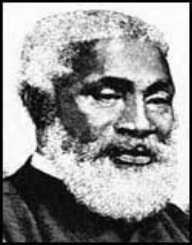 Josiah Henson was born on June 15, 1789. He was an author and minister. He was also an abolitionist. He was born into slavery, but he escaped into Canada when he was a grown up. He founded a school and settlement where slavery fugitives ran to when they escaped. In 1849, he wrote the autobiography ‘The Life of Josiah Henson Formerly a Slave, Now an Inhabitant of Canada as Narrated by Himself’ which majorly focuses on his life as a whole. He later wrote the novel ‘Truth Stranger Than Fiction. Father Henson’s Story of His Own Life’. He died on May 5, 1883, at the age of ninety three.

Josiah Henson was born on June 15, 1789, in Charles County in Maryland. He was born to parents who were slaves. When he was young, he saw his father being beaten just because he had stood up to a slave owner. He also witnessed his father’s right ear being cut off before he was sold to Alabama. Later on, his family’s master died, and so he was separated from his mother and siblings.

However, his mother pleaded with the slave master to bring him back on condition that he will work in the fields. Their slave master was known as Isaac Riley. Josiah worked so hard and impressed his master that he was later promoted to the post of a supervisor at his master’s farm in Montgomery County in Maryland.

In 1825, his master was sued by his brother in law, and he begged Josiah Henson to help him transport eighteen slaves by foot to his brother’s farm in Kentucky. Josiah respectfully assisted his master. In 1828, he went back to his master in Maryland to buy his freedom. He carried with him three hundred and fifty dollars which he presented to his master and promised to pay another one hundred dollars later.

Josiah Henson's master, however, cheated him and added the amount from one hundred dollars to one thousand dollars to be given his freedom. Josiah disappointed by what his master had done, went back to Kentucky. In 1830, he learnt that he might be sold again, so he escaped to Kent County in Upper Canada.

Josiah Henson did not escape alone, but with his family, that is, his wife and their four children. His wife was called Nancy. He, later on, established a settlement and a labourer’s school for other slaves who were fugitives in Canada. The settlement was a hopeful place for slaves who had escaped from slavery in America. The settlement gave them a chance to start their lives again in Upper Canada.

Canada was a safe place since Lieutenant Governor John Graves Simcoe passed an Act that abolished slavery in British Canada at that time. In 1833, slavery was eliminated in the British Empire which Canada was a part of then.

For him to earn a living in Upper Canada, Josiah Henson worked in farms near Fort Erie and the surrounding areas. In 1834, Josiah and his friends moved to Colchester where they built a black settlement on the rented land. He later bought a two hundred acre land in Dawn Township with the assistance of friends and the numerous contacts he had. The settlement grew, and later on, he purchased another two hundred acres then where his family lived.

He later became a preacher in the Methodist Church and also became an abolitionist on routes between Ontario and Tennessee. Later in his life, he joined the Canadian Army where he served as a military officer. In 1837, he led a Black Militia Unit in the Canadian Rebellion. The following year, in his leadership, the militia captured Anne which was a rebel ship. After slavery was abolished in the United States, many slaves went back to America, but Josiah and his family stayed in Dawn for the rest of their lives.