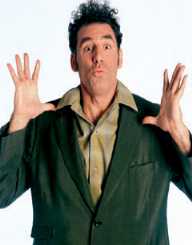 Michael Richards was born on 24th July 1949, to William and Phyllis Richards. He was born in Culver City, California, United States. His father was an electrical engineer, and his mother was a medical records librarian. Michael Richard's father died in a car crash when Richards was just two years old. He studied at Thousand Oaks High School, and after graduation, he was drafted into the U.S. Army in 1970.

He was stationed in West Germany and trained as a medic during his army service. Upon conclusion of his army service, Michael Richards received an honorable discharge. He was able to access benefits from the G.I. Bill, which enabled him to enroll in the California Institute of the Arts. He graduated from The Evergreen State College in 1975, with a Bachelor of Arts Degree in Drama.

In 1979, Michael Richards got his break into television. He appeared on Billy Crystal’s first cable television special. From there, he joined the cast of ABC’s Fridays television show in 1980. Over the next few years, Michael Richards acted in several movies, but most of his work came from television, and he appeared in shows such as Miami Vice, Cheers, and Night Court. The big break came for Michael Richards in 1989, when he was cast in the role of Cosmo Kramer, in what would become the hit NBC television series, Seinfeld. The show was so successful, it ran for nine years, and finished in 1998.

Once Seinfeld finished, Michael Richards began work on his own show, The Michael Richards Show. Unfortunately, the show didn’t rate well, and after only a few weeks was canceled. Between 1982 and 2014, Michael Richards appeared in 15 movies, including Coneheads, and The Bee Movie. During the same period, he was in 30 television shows.

In 2006, Michael Richards did cause controversy when he yelled some racially taunting responses to several black members in the audience who turned up late and were causing disruption as they were settling in for the show.

Michael Richards later apologized on the Late Show with David Letterman, but the incident plagued him for years afterward. Richards admitted some years later that the incident had been one of the main reasons that he had retired from doing stand-up comedy.

Michael Richards received three Primetime Emmy Awards for being the Outstanding Supporting Actor in a Comedy Series for his role in Seinfeld. He received the awards in 1993, 1994 and 1997.

Michael Richard's first marriage was to Cathleen Lyons, a therapist. They married in 1974 and divorced in 1993. The couple had a daughter, Sophia.

Richard's second wife was Beth Skipp. The couple started dating in 2002 and married in 2010. They have a son, Antonio Baz, together.