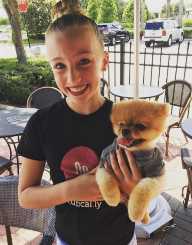 Hannah Mae Dugmore was born on July 22, 2002. She has a younger brother, who was diagnosed with cystic fibrosis. Before starting out her social media career, Dugmore was an avid sportiest. She began running triathlons when she was just eight years old. She has completed 35 triathlons. Dugmore also loves swimming in her free time.

Dugmore began her career at a young age. She was a very athletic young girl and loved dancing. In her local school, she was known as an excellent dancer. She soon began uploading videos on musical.ly and gained a lot of attention. Her natural talent, dexterity, and creativity allowed her to gain a lot of followers quickly.

Dugmore quickly earned a major fan base and reached more than one million followers on musical.ly. The site even published a compilation of her videos to several social media sites. Hannah herself also began to post videos on several sites. With her videos, she also tries to raise awareness for cystic fibrosis.

Dugmore is a dancer for the South Florida Dance Company. Her dancing idol is Michael Baryshnikov. She is very disciplined and loves what she does. Dugmore's talent was further recognized when she got accepted into several prestigious dance programs, like American Ballet Theatre, Joffrey Ballet School NYC Ballet and Orlando Ballet School. Dugmore has also earned several contracts, becoming the ambassador for Covet Dane, Jo and Jax and Bluewater Dancewear.