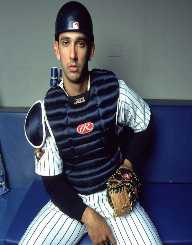 Puerto Rican baseball Jorge Posada who played for the New York Yankees was born on the 17 August 1971 in Santurce, Puerto Rico.

As a pupil at Colegio Alejandrino High School, Posada showed an interest in sport, and in the 1988/89 season, he was a baseball all-star for the school. After high school graduation, he enrolled at Calhoun Community College in Alabama.

Posada was drafted into the New York Yankees in 1991 and made his debut in the major league in September 1995. By 2000 he was the Yankees starting a catcher, and during his time with the Yankees, they won the World Series three times: 1998, 1999 and 2000. He also participated in the All-Star Games between 2000 and 2003. After playing for seventeen years, Posada retired in January 2012.

Jorge Posada has won awards for his work on and off the field. In 2000, he received the Thurman Munson Award

In 2000, he married Laura, and the couple has two children, a son, and a daughter.

The Jorge Posada Foundation was set up in 2000 to raise funds, awareness, and assistance to families dealing with craniosynostosis.