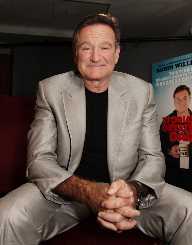 Robin McLaurin Williams was born 21st July 1951, to Robert Williams and Laurie McLaurin. He was born in Chicago, Illinois, United States. Robin Williams father was a senior executive at the Ford Motor Company, and his mother was a former model. He also had two older half-brothers.

When Robin Williams was 16, his father retired, and the family moved to Tiburon in California. Williams then studied at Redwood High School. When he graduated in 1969, he had been voted the funniest student by his classmates, but also the student “Most Likely Not to Succeed.”

After high school, Robin Williams enrolled at Claremont Men’s College, with a view to study political science. He dropped out, however, to pursue a career in acting. He went to the College of Marin where he studied theatre for three years.

Robin Williams’ talent enabled him to win a scholarship to the Juilliard School in 1973. He was one of only two students accepted into the advanced program by John Houseman, the other being Christopher Reeve.

Robin Williams remained close friends with Reeve through the years, until Reeve died in 2004. Since becoming a quadriplegic through a horse-riding accident, Reeve had struggled. Unbeknownst to many, Williams provided financial support to the Reeve family, and also paid many of the medical bills.

Houseman suggested Williams leave Juilliard in 1976, as there was nothing else the facility could teach him.

In the mid-1970s, Robin Williams began performing stand-up comedy routines in San Francisco. In the late 70s, he moved to Los Angeles and continued to work as a stand-up comedian. He was seen at the Comedy Club by a TV producer named George Schlatter.

Schlatter was responsible for the revamped “Laugh-In” television show, and he asked Williams to appear. This would become William’s television debut in 1977. He also made an appearance on The Richard Pryor Show.

He was then cast by Garry Marshall as Mork the alien, in a 1978 episode of the hugely popular television show, Happy Days. His appearance was so popular with viewers that he was given his spin-off show, called Mork & Mindy. The show aired from 1978 to 1982. At the peak of its popularity, Mork & Mindy was viewed by an audience of 60 million per week. This was the show that turned Williams into a household name and launched his super-stardom. Although Mork & Mindy was more popular with the younger audiences, Williams did several stand-up comedy specials for television, which helped him reach a much wider audience.

Over the years, Robin Williams made many appearances on television, including over 50 on the Late Night with David Letterman show. His stand-up comedy was a common thread throughout his career. Despite being a major movie star, Robin Williams continued with his comedy, periodically doing live performance tours, which were renowned for selling out in record time.

Although Robin Williams acted in a low-budget comedy in 1977, his first major role in a movie was in Popeye in 1980. The film didn’t do very well commercially, and Williams went on to act in several other forgettable movies up until 1986.

In 1987, Robin Williams starred in the movie, Good Morning, Vietnam, which became his breakthrough in film acting. His role was largely unscripted, which shows the talent he had. Some of his other major movies included Dead Poets Society (1989), Hook (1991), A Night at the Museum (2006), and Mrs. Doubtfire (1993). Throughout his career, Robin Williams also starred as a voice actor in several animated movies. These included Aladdin, and Happy Feet (2006).

Robin Williams also appeared in several theatre productions. Between 1977 and 2015, Williams acted in around 70 movies, many of them major box office hits. He appeared in over 30 television series, including 92 episodes of Mork & Mindy, and regular appearances on Saturday Night Live and Sesame Street.

Robin Williams married Valerie Velardi in 1978. They had a son, Zachary, together, but divorced in 1988.

His second marriage was to Marsha Garces in 1989. Garces was Zachary’s nanny. Williams had two children with Garces, and they divorced in 2008. Robin Williams married for the third time in 2011, to Susan Schneider, a graphic designer.

Sadly, during the late 1970s and early 1980s, Robin Williams developed a cocaine addiction. The death of his friend, James Belushi, from an overdose, was the catalyst in Williams overcoming his addiction. Williams took up exercise to help him stay on the straight and narrow.

Although he stayed away from the drugs, Robin Williams turned again to alcohol in 2003. In 2006, he entered a rehabilitation center by his own volition. He acknowledged years later that he never overcame his alcohol addiction.

Robin Williams’ wife stated he was sober before his death and had mistakenly been diagnosed with Parkinson’s disease. It turned out to be Lewy body dementia, and the doctors said it was one of the worst cases they had seen. It is believed his illness contributed to the stress and depression he had.

In 1986, Robin Williams founded Comic Relief USA, in conjunction with Whoopi Goldberg and Billy Crystal. As of 2014, the annual television benefit had raised $80 million for the homeless.

Robin Williams also devoted time to support literacy, women’s rights, and veterans. He also traveled to 13 countries to perform for over 100,000 troops.

He established an organization with his second wife Marsha, called the Windfall Foundation which raised money to support various charities.

Apart from his many philanthropic works, Robin Williams was known as a genius on the stage and screen. He always brings a smile to your face. His wide array of films across several genres will be watched and enjoyed for many years to come.