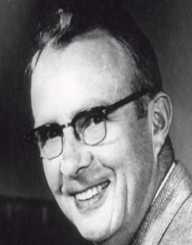 Luis Walter Alvarez was born on 13th June 1911, to Walter and Harriet Alvarez. He was born in San Francisco, United States, one of four children. He had one brother, Bob, who was younger, and two sisters, Gladys, and Bernice. Gladys was older, and Bernice was younger.

His father, Walter, was a physician, as was his grandfather, Luis Walter Alvarez, who he was named after.

Luis Walter Alvarez went to Madison School in San Francisco from 1918 to 1924. Following this, he attended San Francisco Polytechnic High School. His father took a position at the Mayo Clinic as a researcher, so in 1926, the family moved to Rochester in Minnesota. He finished his high school education at Rochester High School.

When high school had been completed, Luis Walter Alvarez did his university study at the University of Chicago. He graduated in 1932, completed his master’s in 1934, and then completed his Ph.D. in 1936.

He started studying physics in 1932. He experimented with cosmic rays, and the resultant paper was submitted by his faculty advisor to the Physical Review, with Luis Walter Alvarez as the author.

Luis Walter Alvarez’s sister, Gladys, was working as a secretary for the Radiation Laboratory, which was owned and operated by the University of California but conducted tests and experiments for the government. She spoke to her employer about Alvarez, and Ernest Lawrence invited Alvarez to attend an exhibition in Chicago with him. When Alvarez completed his doctorate in 1936, he asked Gladys if there were any positions available at Radiation Laboratory, and an offer was soon forthcoming.

When Luis Walter Alvarez joined the Radiation Laboratory, he worked with the experimental team, who worked in conjunction with a group of theoretical physicists. The head of the physicists was Robert Oppenheimer.

Over the next few years, he continued his research, making significant discoveries. He became part of Lawrence’s team, working with microwaves. He invented the linear dipole array antenna, which enabled precision bombing in lousy weather. He continued to work and research, and over the summer of 1943 stayed in England to do further testing and training of the British military.

Luis Walter Alvarez returned to the US in 1943, having had an offer from Robert Oppenheimer to work on the Manhattan Project at Los Alamos. The scientists and physicists were working on completing an atomic bomb ahead of the Germans, to win the war.

At Oppenheimer’s request, he spent several months working with Enrico Fermi at the University of Chicago before joining the others at Los Alamos. He arrived at Los Alamos in the spring of 1944.

Work on the uranium bomb was well underway, so Luis Walter Alvarez began work on a plutonium bomb. He successfully created the implosion required for the required explosion, which was instrumental in the success of a nuclear weapon. He was also able to measure the density of the nuclear blasts, which he did by flying over Hiroshima and Nagasaki after the nuclear bombs had been dropped.

After the Manhattan Project work had been completed, he returned to the University of California, as a professor. He had many ideas to continue with the radar he had invented and to impart his knowledge on improving the performance of particle accelerators.

Luis Walter Alvarez worked with small glass chambers, called bubble chambers, and liquid hydrogen. His team eventually built a chamber that was two meters in length. It took millions of photos of particle interactions that hadn’t been possible before. They also developed computer systems to measure and analyze the particle interactions and discovered new particles and resonance states. Luis Walter Alvarez was awarded the Nobel Prize in Physics for this particular work, in 1968.

Luis Walter Alvarez conducted another large experiment in 1964, called the High Altitude Particle Physics Experiment. Over time, the experiment was used to study cosmology and the role of particles and radiation in the early universe.

He also went to Egypt in 1965, to use Muon tomography to try and find undiscovered chambers in the pyramids, using cosmic rays. After searching for about 20% of the great pyramid, he concluded that no hidden chambers existed.

As an expert in optics and photo-analysis, in 1966, Luis Walter Alvarez was able to prove that President Kennedy had been shot from behind.

In 1980, he also published a paper in conjunction with his son, Walter, Frank Asaro, and Helen Michel, on an alternative theory to the extinction of dinosaurs. The report suggested extraterrestrial involvement that caused a calamity. The paper was rubbished by their peers, but several years after his death, evidence was found off the coast of Mexico, that a large asteroid had impacted earth. In 2010, a panel of 41 scientists came to the conclusion that the asteroid had, indeed, caused the extinction of the animals.

As well as his contributions to science and physics, Luis Walter Alvarez contributed many developments and inventions concerning the aviation industry. He also contributed many papers on his experiments and outcomes in physics.

He owned ten patents for his inventions. Some of these included an electronuclear reactor, subatomic particle detector with a liquid electron multiplication medium, and the method of forming an optical element of reduced thickness.

Two of the most important works of Luis Walter Alvarez were his contribution to the atomic bomb, and also the creation of the liquid hydrogen bubble chamber.

Luis Walter Alvarez was a member and fellow of many societies and received many awards and honors for his work. Some of his more notable awards are as follows

1960: California Scientist of the Year

Luis Walter Alvarez was married twice. His first marriage was to Geraldine Smithwick in 1936. They divorced in 1957. He had two children with Smithwick, a son, Walter, and a daughter, Jean.

His second marriage was to Janet Landis in 1957. He had two more children with Landis, a son, Donald, and a daughter, Helen.

Part of Luis Walter Alvarez is the contribution he made to the creation of a successful atomic bomb, allowing the Americans to win and finish the Second World War.

His contributions overall to the science of physics have allowed the advancement of experiments, particularly in observing the behavior of particles.