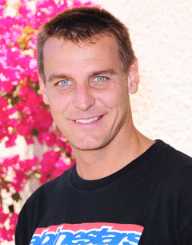 Australian actor Ingo Rademacher was born on April 22, 1971, in Iserlohn-Letmathe, West Germany (present-day Germany). His parents Arndt and Roswitha Rademacher moved to New South Wales, Australia when he was 10 years old. Growing up in the vast 400-acre expanses of the cattle and Angora goat station possessed by his parents in Australia, Rademacher showed glimpses of his gifted athleticism. He became a skiing champion before turning eight.

Rademacher was an avid sports enthusiast and was always preoccupied with numerous sporting activities. He engaged himself in activities like mountain biking, surfing, beach volleyball, and triathlete events. In spite of remaining engaged most of the time, he was always ready to extend his helping hand in his parents’ vocation of cattle, goat rearing, and vegetable farming. By the time he completed his teenage years, he became an established equestrian.

Upon completion of his high school studies, Rademacher attended the University of Queensland (Brisbane) for a brief period. He dropped out of the university only after six months and went on to pursue modeling. Though he continued to be associated with different sporting activities, Rademacher did not embrace any of his favorite athletic pursuits as a professional career. Instead, he began acting upon completion of his modeling stint. He landed the first role of his acting career as a surfer Sean Hayden in the Australian Soap Opera ‘Paradise Beach’ (1993). However, the show went off the air within a year. Thereafter, he decided to move to Los Angeles, the United States of America in search of greener pastures.

Rademacher arrived at Los Angeles in 1994. Jaason Simmons, a former co-star of Paradise Beach helped him in arranging a residential accommodation in Los Angeles. After unsuccessfully auditioning for a soap opera titled ‘The City’, he landed the role of Jasper "Jax" Jacks in the American television medical drama ‘General Hospital’. Surprisingly, Wendy Riche, the director of the mega television series, selected Rademacher for the role after seeing the unsuccessful audition tape of ‘The City’.

Incidentally, Rademacher played the character of Jasper, a suave tycoon, for 15 long years. He started appearing in the show in 1996. Soon, he hit a brilliant on-screen chemistry with his co-actress Vanessa Marcil. Their sizzling chemistry made them one of the most favorite couples of the show. He briefly left the show for acting in another prime-time drama ‘Titans’ in 2000 only to rejoin the cast in 2001. He remained a part of the show until 2011. Ingo joined the cast of the long-standing CBS soap opera ‘The Bold and the Beautiful’ in 2017 and made his first appearance on November 27, 2017.

EXCELLING AS A COMEDIAN

Rademacher showed glimpses of his brilliance as a comedic actor in few of his television dramas. ‘Clueless’, ‘Veronica’s Closet’, ‘Titans’ and ‘According to Jim’ proved his mettle as a class actor in comic characters.

He made his presence felt on the big screen as well when he made his debut in a feature film titled ‘Alex Cross’ in 2012.

Rademacher was a passionate water sports enthusiast. He began his love affair with the sports racing Hobie cats. Later, he participated in the Lifeguard's King's Race held in Honolulu for 4 years successively. He also contested in an arduous race in shark-infested waters for 4 years. He first completed the 32-mile water race from Molokai to Oahu aboard a surf ski in 2000. In 2012, 2013, and 2014, he finished the distance solo on a stand-up paddleboard. He was a lifeguard at age 16 patrolling the Australian Sea beach. Besides, he is a regular stand-up paddle (SUP) racer and was ranked 80th in the world in 2014.

Rademacher dated his General Hospital co-actress Rebecca Herbst during the late 1990s. He married his Hawaii born girlfriend Ehiku Rademacher on October 3, 2009, after having a son together in 2008. The couple was blessed with another son in 2012.

Rademacher has a home in Hawaii which he purchased in 2006. In 2012, he and his native wife started an activewear store in Hawaii. They moved back to Los Angeles in 2017 to coordinate the manufacturing process of their Mahiku activewear company. Being located at Los Angeles, he also is pursuing his acting career more seriously.