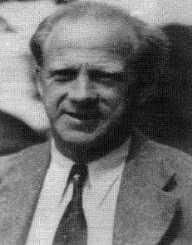 Eminent Nuclear Physicist Walther Gerlach was born on August 1, 1889, in Biebrich, Hessen-Nassau, German Empire to Dr. Valentin Gerlach and his wife, Marie Niederhaeuser. He studied at the Eberhard Karls University of Tübingen enrolling himself in 1908 and graduating in 1911. He started his doctorate under the able guidance of the eminent German physicist Louis Karl Heinrich Friedrich Paschen in the same University. The topic of his dissertation was on the measurement of radiation. He obtained his doctorate in 1912 and continued to work as an assistant to Paschen which he had been doing since 1911. Simultaneously, he started working for his Habilitation at the University of Tübingen and completed the same in 1916.

During the World War I, Gerlach was inducted into the German Army and was allocated the work of wireless telegraphy under Max Wein, the director of the Institute of Physics at the University of Jena. His other vocation in the Army was serving the Artillerie-Prüfungskommission under Rudolf Ladenburg.

After receiving his habilitation in 1916, Walter Gerlach became a Privatdozent at the University of Tübingen. On the very next year, he became a Privatdozent at the Georg-August University of Göttingen. In 1919, he started working as the Head of the physics laboratory of Farbenfabriken Elberfeld (formerly Bayer-Werke) and served there until 1920. In 1920, he accepted the position of teaching assistant and lecturer at the Johann Wolfgang Goethe University of Frankfurt am Main. A year later, he was designated as the extraordinarius professor in the Institute of experimental physics of the same University.

Around the same time, Walter Gerlach met Otto Stern, who was working as an assistant in the Institute of Theoretical Physics of the same University. They started working on spin quantization in a magnetic field together and conducted their first experiment in 1921. Their discovery is famously referred to as Stern–Gerlach effect. However, as Stern went away after receiving his first academic post at the University of Rostock, their partnership was broken, and Gerlach continued with the experiments single-handedly.

In 1925, Walter Gerlach left Frankfurt and accepted the offer to become an ordinarius professor at the University of Tübingen, succeeding his mentor and doctoral advisor Friedrich Paschen. In 1929, Ludwig Maximilians University of Munich offered him the post of an Ordinarius Professor which he accepted with pleasure. He served the University until May 1945 when the Allied Forces arrested him along with many other scientists under Operation Alsos.

In 1937, Walter Gerlach was drafted in the supervisory board of Kaiser Wilhelm Institute of Chemistry. The Institute was established in 1911 to conduct scientific experiments. The Nazis under their infamous leader Hitler used the Institute for experimenting and developing the necessary arsenals required to dominate a World War. Again, in 1939, Gerlach was elected as a member of a Comerlin working group which dealt with ship degaussing and torpedo physics. Degaussing is a process by which the magnetic field around a ship is neutralized by encircling it with a conductor carrying electric currents.

After his arrest by the allied forces, Walter Gerlach was interned first in France and then in Belgium. The intention of the captors was mainly to extract information about the extent of scientific development, especially in warfare technology in Germany under Hitler. On July 3, 1945, Gerlach along with nine other fellow scientists was sent to England and imprisoned in Farm Hall in Godmanchester near Cambridge under Operation Epsilon. These ten scientists were kept together and allowed free conversation with each other to determine their involvement in the German Atomic Bomb development program. All the ten scientists were suspected to have taken part in the development of Atomic Bomb in Germany.

The Allied forces were trying to determine the extent of their progress by listening to their taped conversations. By January 1946, Gerlach was released after confirming the fact that Germany was unable to develop an atomic bomb. He became a visiting professor at the University of Bonn upon his return from captivity. In 1948, he joined the University of Munich as an Ordinarius Professor of Experimental Physics and also as a director of the Physics department. He held the position until 1957. Additionally, he served the University in the capacity of Rector from 1948 to 1951.

Walter Gerlach held many positions concurrently. He was the founding President of the Fraunhofer-Gesellschaft, an Institute committed to the promotion and development of applied sciences. He held the position from 1949 to 1951. He was also the Vice-President of German Association for the Support and Advancement of Scientific Research, a position he held from 1949 to 1961.

Gerlach was a signatory to the Göttingen Manifesto along with seventeen other important nuclear scientists of Germany. It was a declaration by eighteen leading nuclear scientists of Germany including the likes of Otto Hahn, Max Born, Werner Heisenberg and Max von Laue. They gave their mandate against arming the West German army with tactical nuclear weapons in the 1950s, the early part of the Cold War, as the West German government under Chancellor Adenauer had suggested.

Walter Gerlach was conferred the Civil Class of the order Pour le Mérite in 1970 for his contribution to Physics. It is the highest order of merit instituted by the Government of Germany in recognition of extraordinary personal achievement.

The brilliant scientist left for his heavenly abode on August 10, 1979, after breathing his last in Munich, Germany.

His compatriot Otto Stern received the Nobel Prize in Physics in 1943. The citation deliberately omitted the mention of Stern-Gerlach effect to deny Gerlach any credit as he continued to work in Nazi Germany.