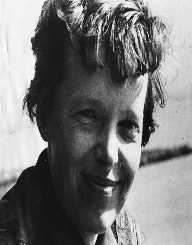 Amelia Earhart was born 24th July 1897, to Samuel and Amelia Earhart. She was born in Atchison, Kansas, United States, and was the older of two girls. Her younger sister was named Grace. Amelia Earhart's mother was not a conventional woman and raised her daughters to be free spirits.

In 1907, Amelia Earhart'sfather received a transfer through his employment, to Des Moines, in Iowa. The following year at the Iowa State Fair, Earhart saw her first airplane. Her father tried to talk Earhart and her sister into taking a ride, but they wouldn’t have a bar of it.

While Amelia Earhart's parents moved to Des Moines to settle in, the girls stayed in Atchison with their grandparents. Earhart had home-schooling during this period. In 1909, the sisters were reunited with their parents in Des Moines, and Earhart was enrolled in a public school for the first time. Unfortunately for the family, Amelia Earhart's father was an alcoholic. He was forced into retirement in 1914. He tried to rehabilitate himself, but his employer, Rock Island Railroad, never re-employed him. Earhart’s grandmother died during this period, and Earhart was devastated.

Her grandmother, Amelia Otis, left her daughter’s share of the estate in a trust for fear that Earhart’s father would drink the money away. In 1915,  Amelia Earhart's father found new employment for a different railway in St. Paul, Minnesota. The family moved with him, and Earhart studied at Central High School. Bad luck continued to dog Earhart’s father, when the previous employee decided not to retire after all and wanted his job back.

Amelia Earhart's mother took the girls to Chicago, where they lived with family friends. Earhart enrolled in Hyde Park High School to study science but was unhappy there. She graduated the following year in 1916. Amelia Earhart had always aspired to something greater and had a scrapbook with newspaper cuttings in relation to successful women, particularly those in male-dominated careers.

In 1917,  Amelia Earhart went to visit her sister who was living in Toronto. Many wounded soldiers were returning from the First World War, and  Amelia Earhart trained as a nurse’s aide with the Red Cross so she could help. She began working at the Voluntary Aid Detachment at Spadina Military Hospital. To further exacerbate the situation, there was a Spanish flu pandemic in 1918.  Amelia Earhart remained in Toronto and worked long hours to try and help. Instead of that, she suffered from pneumonia and maxillary sinusitis and became a patient.

Amelia Earhart was in the hospital for a month, but it took nearly a year for her to recover. During this period, she lived with her sister in Massachusetts. In 1919, she went back to school, enrolling at Columbia University. She was going to study medicine, but after one year she dropped out and went to be with her parents who had reunited

In 1920, Amelia Earhart was taken for an airplane ride by Frank Hawks. She knew immediately that flying would be her destiny. She took on various jobs, from photography to truck driving and saved $1,000 for flying lessons. She initially learned from Anita Snook, a pioneer in female aviation. She purchased herself a leather jacket to look the part, and within six months had purchased her first plane, a KinnerAirster biplane. Amelia Earhart was issued her pilot’s license in 1923 and was only the 16th woman in the U.S. to have one.

Amelia Earhart's mother had been administering the inheritance left to her by her grandmother, but a bad investment saw the inheritance exhausted, so  Amelia Earhart sold her plane, along with another Kinner that she had, and purchased a car instead. The sinusitis still plagued  Amelia Earhart, and in 1924 she was once again hospitalized for an operation, but this was unsuccessful like the first one was.

Her parents divorced that same year, and  Amelia Earhart and her mother took off across the country on a road trip. They ended up in Massachusetts, and Earhart had yet another sinus operation, and this one was somewhat more successful.

After recovery from her operation, she returned to university but was only able to study for a few months as her mother had run out of money and couldn’t afford the tuition.  Amelia Earhart became a teacher and in 1925 became a social worker. During this period Earhart was living in Medford, Massachusetts, and she continued with her interest in aviation. She became a member of the American Aeronautical Society, Boston chapter.

Amelia Earhart became a sales agent for Kinner aircraft in Boston and wrote articles about flying for the local newspaper. In 1927, Charles Lindbergh crossed the Atlantic on a solo flight. Amy Guest wanted to be the first woman to do the same, either flying or being flown, but she decided the trip was too dangerous. She did, however, agree to sponsor another woman to do the trip, and Amelia Earhart was put forward as a suitable candidate. The book publisher and publicist for the project was George P. Putnam, who would later become Earhart’s husband. The flight was a successful one, and after returning to the U.S., the group of  Amelia Earhart, Stultz, and Gordon, who had undertaken the flight, were greeted with a ticker-tape parade in Manhattan, and a reception with President Coolidge at the White House.

Amelia Earhart under ok a lecture tour of the country during 1928 and 1929. Putnam and Earhart also did promotional work, and many promotional items began to appear with Earhart’s name on them. It was all the promotional work and item sales that raised the funds to finance her flying.

Ameli Earhart was very involved in regional air services between New York and Washington, D.C., and went on to become Vice President of National Airways. In 1940, it became Northeast Airlines. In 1929,  Amelia Earhart undertook solo flying missions and became the first woman to fly solo across the North American continent and back. She was making a name for herself and gaining respect within the industry. Over the next couple of years,  Amelia Earhart would continue to break records with her flying and to actively promote female aviation in the Federation AeronautiqueInternationale (FAI). She would continue to make her solo flights, breaking many records in the process, through to 1935. In September 1935,  Amelia Earhart established the Earhart-Mantz Flying School in conjunction with Mantz. Mantz owned United Air Services and operated the flying school through his company.

World Flight In the Making

Amelia Earhart joined Purdue University in 1935 as a member of the faculty. In 1936, she began planning a flight that would take her around the world. It was to be funded by the university. She chose Captain Harry Manning as her navigator, Fred Noonan as her second navigator. They took off in March 1937 from California to Honolulu, Hawaii. When taking off from Hawaii there were problems which damaged the plane, and the flight had to be called off. They returned home, and after the plane was repaired, they took off again. This time they flew from California to Miami to start the trip.

On the second attempt, there were only two on board –  Amelia Earhart and Fred Noonan. They left from Miami on 1st June, and over June, they flew about 22,000 miles, completing about two-thirds of the journey. They stopped in many places, including South America, Africa, India, and Southeast Asia. They arrived in Lae, which was part of New Guinea, on 29th June 1937. The last 7,000 miles would be flying across the Pacific Ocean.

The last position to be reported by the pair was 800 miles into the flight, near the Nukumanu Islands.

There was a ship called the USCGC Itasca, which was moored at Howland, with the specific task of making radio contact with the plane and guiding them into the island. Although the Itasca could hear  Amelia Earhart transmissions, she could not hear those from the ship.

The search for the plane began about an hour after the last message that had been heard. The U.S. Navy soon joined in with the search, and four days later, the battleship named Colorado was put in charge of the search efforts.

Sometime later, after the official search ended, Amelia Earhart's husband, Putnam, financed his own search. He applied to the courts to have the “declared death in absentia” waiting period of seven years waived. This was so he could use some of Earhart’s estate to pay for the search.

Due to the waive being granted,  Amelia Earhart was declared dead on 5th January 1939.

As with any mysterious death, speculation and conspiracy theories abounded.

Some believed Amelia Earhart and Noonan landed the plane elsewhere and survived, but the evidence was never found. Others believe they were captured by the Japanese.

Over the years, several very knowledgeable people have studied different aspects of the trip and radio broadcasts trying to find a solution, but they only have speculation. The mystery of  Amelia Earhart and Noonan’s disappearance has never been solved.

Among her many awards were the following:

Amelia Earhart also broke many flying records, most of them being the first woman or the first person to fly solo between different destinations.

Putman proposed to Amelia Earhart on six occasions before she accepted, with some reservations. They were married in February 1931.

The couple did not have children together, although Putman had two sons from his previous marriage.

Many buildings, scholarships, and airports have been named or partially named in  Amelia Earhart's honor. There are over 35 in all.

The Amelia Earhart Foundation was established in 1995 to fund research and scholarships. It is run through a network of 50 people called “Earhart Professors” who work across the United States.