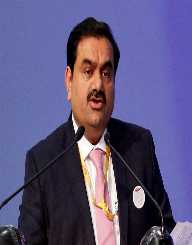 Indian businessman Gautam Shantilal Adani was born on June 24, 1962. His birthplace was in the Seth ni Pol area in Ahmedabad, Gujarat, India. Adani has several siblings. He got his education from Sheth Chimanlal Nagindas Vidyalaya School in Ahmedabad, India and later studied at Gujarat University.

Adani’s father had a textile unit in Ahmedabad, but Adani chose not to follow his father’s footsteps. Instead, Adani moved to Mumbai when he was 18 years old. He did not have much money, and he had to find a job. Ajani began working as a diamond sorter at Mahindra Brothers. He worked at the company for two years and wen to set up his diamond brokerage business in Mumbai. Within a year, Adani made his first million.

In 1982, one of his brothers, who was an entrepreneur, asked Adani to come back to Ahmedabad. He had purchased a plastic factory and asked Adani to run it. Adani started to import polyvinyl chloride, thus beginning his commodity trading.

Adani is known in the business world for taking several major risks. His work paid off, and in 1988 he established Adani Exports Limited, a flagship company for Adani Group. With the company, Adani continued to trade in a variety of power and agricultural commodities. His business grew rapidly after the 1991 economic liberalization. His capital grew with the help of Adani Exports major profitability.

In 1993, the government of India invited private companies to run the Mundra Port. In a 1995 contest, the contract was given to Adani Group. Today, Mundra port is the biggest Private Sector port in India. It handles around 80 million tons of cargo every year.

Adani gives 3% of Adani Group profits to the Adani Foundation. His biggest pride is the Adani Vidya Mandir school in Ahmedabad, where children who come from families with low income can get an education. His wife Priti runs the school.

Adani’s success does not come without several controversies. Adani has been accused of supporting Narendra Modi for his campaign in Bharatiya Janata Party. Modi was seen traveling on Adani Group’s charter planes to his rallies across India. Adani cleared up the speculations by talking on CNBC and clarifying, that Modi paid for usage of Adani Group aviation services.

It has also been rumored that Adani Group was given land for their infrastructure expansions for a price three times lower than the market price.

Adani is married to Priti Adani. She is a dentist and leads the Adani Foundation as the Managing Trustee. She also leads the Adani Group’s school in Ahmedabad. The couple has two sons.