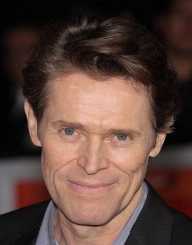 The only actor to ever win an Oscar nomination for playing a vampire, Willem Dafoe is an American actor. He also portrayed Green Goblin in the famous Spiderman movie and had provided his voice in several animated films & series. Dafoe mainly takes up evil or villainous roles and is well known for adding uniqueness to the characters that makes them very strong and convincing. He has also played some functional roles such as that of an FBI agent in Mississippi Burning.

Willem Dafoe was born on July 22, 1955, in Appleton, Wisconsin, the U.S.  His real name is William Dafoe, and his star sign is Cancer. Dafoe’s father, William Alfred Dafoe is a doctor, and his mother’s name is Muriel Isabel. He has six siblings – 5 sisters and a brother.

Willem Dafoe went to the Appleton East High School for his primary education. He then went to the University of Wisconsin and studied drama. However, the traditional college curriculum didn’t interest him much, and he joined Theater X – an experimental theatre company.

Willem Dafoe had a humble start to his career when he played a small role in Heaven’s Gate in 1981. But his part was later cut from the final movie after the edits, and it was only a year later that his name featured in a film about a biker gang The Loveless. He majorly remained a supporting actor in minor roles over the next two years, with many of the films achieving only moderate success at the box office.

Willem Dafoe's career took off only in 1985, when he played Rick Masters in the movie To Live and Die in L.A., The movie got him a lot of recognition, and critics praised him for his remarkable portrayal of the character & his acting skills. He appeared in Platoon next year as Sergeant Elias and got a nomination for the best supporting actor.

Not wanting to be typecast into a specific kind of role, Willem Dafoe played many different characters – good or bad in the late 1980s. Some of the notable films from this period include The Last Temptation of the Christ, Triumph of the Spirit and Flight of the Intruder.

After 2000, Willem Dafoe has mainly appeared as a villainous character in movies. His portrayal of a vampire Max Schreck in Shadow of the Vampire made him the only actor in history to earn an Oscar nomination for the role of a vampire. He also appeared as Green Goblin in Spiderman.

Some of his films in the new millennium include Colagrande, Inside Man, The Walker, Adam Resurrected, Daybreakers, The Hunter, etc. He was recently seen as Marcus in the blockbuster film John Wick. He is also set to appear in Justice League and Aquaman – both much-awaited movies.

In his long career, Willem Dafoe has won several awards and nominations. His 1986 film Platoon earned him an Academy Award nomination. He was also nominated for an Oscar for Shadow of the Vampire.  In 2002, he won the Special Award for Immense Contribution to the Art of film. He is also the winner of the Stockholm Achievement Award which he received in 2012.

Willem Dafoe began a relationship with director Elizabeth LeCompte after meeting her at The Performance Group. They had a son named Jack in 1982. The relationship lasted 22 years after which they separated in 2004.  He then married actress and screenwriter Giada Colagrande in 2005. As Colagrande is from Italy, with this marriage, Dafoe now holds dual citizenship – American as well as Italian. Dafoe is a practitioner of Yoga and used to follow vegetarianism.