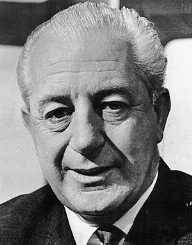 Harold Holt was elected to the Federal Parliament of Australia in 1935. He had served as MP for about 31 years. He was elected leader of the liberal party in 1966 and became Prime Minister.

Harold Holt was the first Prime Minister to be born in the Commonwealth of Australia. During his brief tenure as Prime Minister, he made some historic changes. He created controversy by increasing the number of troops in Vietnam.

Harold Holt was born on 5 Aug 1908 in Stanmore, New South Wales. He was the son of Thomas and Olive Holt. His parents divorced, and his mother died in 1924. Harold was enrolled at Wesley College as a boarder.

Harold Holt was an excellent student and won a scholarship to study law at Queens College at the University of Melbourne. He excelled in sports and debate. He won college Blues and also oratory and debate prizes.

Harold Holt worked as a lawyer and was urged by his friends including Menzies to join politics. In 1935 Holt entered parliament at just 27 years of age. In 1940 Holt was enlisted in the Australian Imperial Force as a gunner. When three cabinet ministers were killed in an air crash, he was recalled by Prime Minister Menzies and appointed a minister. He was nicknamed gunner Holt.

Harold Holt was given The Labour portfolio in 1940 and made Minister for Labour and National Service.He introduced Child Endowment in 1941. He is considered to be one of the best labor ministers even today. A front bench revolt in 1941 caused Menzies to resign. Menzies then formed a new party called The Liberal Party of Australia. Holt joined this party. Later a coalition with The Country Party was made.

The coalition won in Dec 1949. Menzies again appointed Holt as Minister for Labour and National Service and also Minister for Immigration. He was appointed as Privy Counsellor in 1953. Holt’s popularity and political standing grew, and he served on many committees and overseas delegations. In 1956 he was elected as Deputy Leader of the liberal party and leader of the House. He was considered by many as Menzies successor. In 1958 he was made Treasurer. Holt convinced the cabinet to call the new currency “dollar.”

When Menzies retired in 1966, Harold Holt was made Prime Minister. Holt shared a close relationship with the American President Lyndon Johnson. Holt made the following reforms as Prime Minister. Holt’s ministry had the first woman to administer a Federal government. He appointed Senator Annabelle Rankin as Minister for Housing.He introduced the decimal currency on 14 Feb 1966. The Australian Battalion in South Vietnam was replaced by a larger task force (4500 men). Holt faced a lot of criticism for this. Significant changes were made in the White Australian Policy.

A defense space research facility was established in Pine Gap jointly with US agreement. The referendum to remove two references in the Australian Constitution was passed. These were provisions which discriminated Aborigine people. A council for Aboriginal Affairs was set up on 2 Nov 1967. References to “British” from Australian passports were removed. “British Subjects” was removed from Nationality and Citizenship Act.The first Australian satellite was launched from Woomera in South Australia.

On 17 Dec 1967 Holt went swimming in Cheviot Beach. The surf was high and fierce. Harold Holt began swimming but soon disappeared. Massive search operations were conducted, but Holt was not found.

On 19th Dec the government made an official announcement that Holt was thought to be dead. Harold Holt was a strong swimmer, and his death at sea was met with disbelief. There was, however, a heart condition and an injury to his shoulder which made it seem possible.

His disappearance seemed to be a mystery and gave rise to a lot of rumors. There was also talk of suicide.

A memorial service was held at St Paul’s Anglican Cathedral in Melbourne on 22 Dec which was attended by many dignitaries. Holt’s widow Zara Holt was made Dame Commander of the Order of The British Empire.

Harold Holt Memorial Swimming Centre commemorates Harold Holt in Melbourne. A US warship was named in his honor. A plaque was bolted to the Seafloor of Cheviot Beach in 1969 in his honor.