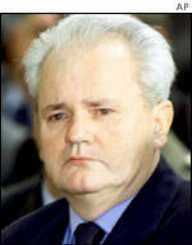 Slobodan Milosevic was born on August 20, 1941. He was a Serbian dictator and politician. He served as the president of Serbia for eight years, that is, from 1989 to 1997. He was also the President of the Federal Republic of Yugoslavia for three years, that is, from 1997 to 2000. He was followed by a lot of controversies during his reign as President. His reign was also marked with the breakup of Yugoslavia and the wars that took place in Yugoslavia at his time.

Slobodan Milosevic was also actively involved in the wars in Bosnia and he was therefore charged with crimes against humanity and genocide at the International Criminal Tribunal for the former Yugoslavia. He died in jail before he could be taken to trial.

Slobodan Milosevic was born on August 20, 1941, in the Axis invaded land of Pozarevac, in the Kingdom of Yugoslavia. He was born to Svetozar Milosevic and Stanislava Resanovic. His father was a Serb Orthodox priest and his mother was a school teacher and a member of the communist party. He attended University of Belgrade’s Law School where he graduated with a Degree in Law. While a student he was the head of the ideology committee of the Yugoslav Communist League’s (SKJ) student branch. In the University he met Ivan Stambolic who introduced him to the President of the Serbian Executive Council, Petar Stambolic.

In 1966, Slobodan Milosevic began working in the management and banking sector. He served as an economic advisor to the mayor of Belgrade. He later on worked at the Tehnogas Company. By 1973 he became the chairman of the Tehnogas Company through his connection with Peter Stambolic. In 1984, he entered politics via the Belgrade League of Communists City Committee. In 1986, he became the president of the SKJ’s Serbian Branch Central Committee at the 10th Congress of the Serbian League of Communists. In 1987, he had already established himself in politics that he even started opposing the government and the ethnic group of the region, Albanians.

Slobodan Milosevic was labeled as a revolutionary who was opposed to brotherhood and unity. His mentor Peter Stambolic resigned and he became the Serbian Leader. As a Serbian leader he put up reforms to revive the Yugoslavian economy by initiating free market reforms. He also formed a commission which comprised of Belgrade’s leading neoliberal economists. He later replaced all the government officials and leaders of Vojvodina and Montenegro with people who supported him. In 1989, he took up the position of Peter in the Republic’s presidency. As President he made various constitutional amendments which were approved by the governments of Serbia, Kosovo and Vojvodina.

The amendments encouraged Serbian Control over the courts, national defense, police and foreign affairs. Albanians did not vote and so Slobodan and his supporters were elected to positions of authority by Serbian voters. The League of Communists of Yugoslavia federation later broke up when people started having ideological differences. In 1992, the Federal Republic of Yugoslavia was created by Serbia and Montenegro. The creation of the Federal Republic led to the dismantling of the communist infrastructure and creation of a federal democratic republic multiparty system of governments. In the same year Slobodan was reelected as the President of Serbia.

During the Yugoslavian War he led Serbian militants against Croatia, Slovenia and Bosnia. The war affected the Serbian economy which was suffering due to sanctions placed upon the nation by the United Nations. To lift the sanctions on Serbia, Slobodan was inclined to accept the peace accord and end the fighting that was going on in Bosnia then. The new Federal Republic of Yugoslavia became a democracy but Slobodan still retained authoritarian control during his term as president. Slobodan Milosevic controlled the media fully and formed opportunistic alliances with other parties.

In 1997, Slobodan Milosevic forcefully led the federal parliament to elect him to the post of president. He was made President but charges were brought against him for forceful elections by the United Nation’s International Criminal Tribunal for former Yugoslavia. In 1999, he was accused for war crimes and crimes against humanity caused in the Kosovo War. In 2000, he lost the presidency to opposition leader Kostunica. He refused the first results and so he led mass demonstrations which came to be known as the Bulldozer Revolution.  A second round off election was held and he lost again.

Slobodan Milosevic later on accepted defeat and stepped down from the presidency. In 2001, he was forced to surrender following charges of Corruption and abuse of power. He was transferred from jail in Belgrade to the International Criminal Tribunal for the Former Yugoslavia. In 2002, trial began and he was accused of war crimes in Croatia and genocide in Bosnia.

In 1971,Slobodan Milosevic married Mirjana Markovic with whom he had two children, Marko and Marija. While in a jail at Hague he suffered heart problems and high blood pressure. On March 11, 2006, he was found dead in his cell in the United Nation’s War Crimes Tribunal’s Detention Center. He died of a heart attack.