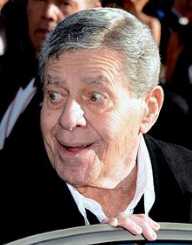 Acclaimed comedian-actor Jerry Lewis alias Joseph Levitch was born on 16th March 1926 In Newark, New Jersey, the U.S.A. to Russian Jewish parents. His father Daniel Levitch, also known as Danny Lewis in the professional circuit, was primarily a vaudeville entertainer. Mother, Rachel Levitch nee Rae Brodsky was a piano player, who used to perform for radio stations. At the tender age of five, Jerry Lewis started his first performance with his parents and continued to perform in the same fashion in the Catskill Mountains in New York State.

Jerry Lewis was a notorious prankster in his teens creating havoc in his neighborhood. Stealing fried chicken and pies from neighborhood kitchens was one of his favorite pranks among many others. Due to some heart problem, he was rejected for military service during World War II.

Teaming up with singer Dean Martin on the Martin and Lewis comedy team, Jerry Lewis complimented Martin’s straight man acting with his unconventional and quirky antics. Their hilarious interaction left the spectators in splits.  Thus came their rapid ascension to national prominence in the form of their most sought after nightclub act and subsequently in their very own radio program.  The duo’s many live appearances in the early days of television broadcast include their debut CBS’s ‘Toast of the Town’ on 20th June 1948, followed by Welcome Aboard on NBC and The Colgate Comedy Hour.

In between they launched their regular radio show ‘The Martin and Lewis Show.’  As the show received a resounding success, Lewis started also performing as a solo star in different films, musical concerts, and television and nightclubs.  Jerry Lewis' big screen debut came in the 1949 film ‘My Friend Irma’ with his partner Dean Martin which earned him very critical acclaim. From 1950 to 1956 they together made 16 films under the production of Hal B. Wallis.

They were the first comedy team to strike it big on television and the best selling comics ‘The Adventures of Dean Martin and Jerry Lewis’ stands as testimony to their successful partnership. However, Martin’s inferiority complex and ego became the bone of contention, and the duo parted thereafter both professionally and personally, ending a superlative journey together.

After the split, Jerry Lewis started his solo career successfully both as an actor and director. The Delicate Delinquent (1957), his first film after the departure of Martin, was a huge hit which firmly placed him as a solo star. His masterpiece characterization of ‘The Nutty Professor’ is hailed as the highest point of his career. Lewis’s directorial debut came in 1960 with the film ‘The Bell Boy.’

Jerry Lewis also tried his hand at music and had belted out two hit songs "Rock-a-Bye Your Baby with a Dixie Melody" and "It All Depends on You" eventually moving forward to release his album ‘Jerry Lewis Just Sings.’ Jerry Lewis was the anchor for the television show ‘The Jerry Lewis Show.’ He also had a production house which went by the name ‘Jerry Lewis Productions’ which in partnership with Paramount Pictures produced approximately 14 films over a period of 7 years.

He was inducted in the Hollywood Walk of Fame with a two-star honor.

In 2005, Jerry Lewis received the highest Emmy Award in the form of the Governors Award of the Academy of Television Arts and Sciences Board of Governors.

Another notable achievement of Lewis was the Jean Hersholt Humanitarian Award conferred in 2009 by the Academy of Motion Picture Arts and Sciences.

One of the high points of his career was his tenure as national chairman of the Muscular Dystrophy Association.  He was even nominated for Nobel Prize for his 50 years fighting muscular dystrophy and collecting donations for the cause.

Jerry Lewis had married twice. Patti Palmer, his first wife, a former singer got married to him on October 3, 1944. They divorced in September 1980. He entered into wedlock for the second time on 13th February 1983 with SanDee Pitnick, in Key Biscayne, Florida. He has five biological sons from his first marriage. He had adopted one son with Patti Palmer and later adopted a daughter with SanDee Pitnick.

From sustaining a back injury in a comedic pratfall from a piano, which left him almost paralyzed for a while, Jerry Lewis has a significant story of illnesses and health concerns. During his recovery after the said accident, he got addicted to a painkiller, named Percodan for thirteen years. He somehow kicked off the addiction. In April 2002, a neurostimulator was implanted in his back, which ultimately reduced his related problem and discomfort.

Jerry Lewis also has a history of a series of heart attacks, both major and minor during a prolonged period. Later it was found that his heart was severely damaged and he had pneumonia. Two stents were inserted into one of his 90% blocked coronary arteries, and cardiac catheterization was done on him. After the induction of the cardiac catheterization, blood flow to his heart increased considerably, and in a few weeks time, he became fully functional again. His long battle with heart disease was made difficult by his other major diseases including prostate cancer, diabetes, and pulmonary fibrosis.

Jerry Lewis is a world-renowned humanitarian and has relentlessly worked for spreading awareness about muscular dystrophy. He raised funds for the cause through his MDA telethons. Currently, Lewis and hope2Day, an Australian charity are involved with the work of raising funds for ‘Jerry’s House,’ a place to be dedicated to vulnerable and traumatized children.