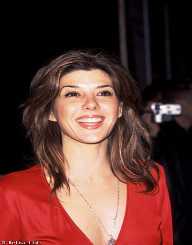 Marisa Tomei was born on December 4th, 1964. Her fame came in American film acting, television, and theatre. She began with ‘As the World Turns’ as Marcy Thompson and her big screen debut was the comedy ‘The Flamingo Kid’. She has also been a performer in theatres where she earned accolades in ‘Daughters. Marisa has received several awards as an outstanding actress.

Marisa Tomei was born in an Italian family on December 4, 1964, in Brooklyn, New York. Her mother, Patricia "Addie" Tomei worked as an English teacher while her father, Gary Tomei, was a lawyer. She had a brother called Adam Tomei. Gary had ancestors from Tuscany, Calabria, and Campania; Patricia descended from Tuscany and Sicily.

Marisa was also brought up with her paternal parents for sometimes. Marisa’s mother usually corrected her accent to eliminate the Brooklyn accent and learn good English. In her childhood, her parents used to go with her to Broadway theatre where she started developing passion for acting. This happened in the Brooklyn neighborhood in Midwood where she grew up.

Marisa Tomei attended Andries Hudde Junior High School. She went to Edward R. Murrow High School where she graduated in 1982 and went to Boston University in Massachusetts for one year in 1983.

Tomei dropped out to of the university to pursue acting in her debut series ‘As the World Turns ’from CBS in 1983. She continued with the series until 1985. In 1984 Marisa acted as a server, Mandy, on a minor film debut, The Flamingo Kid, with only one line to act. In 1986, she acted on A Different World, which was a sitcom that she took the role of Maggie Lauten. In 1987, she acted on her first stage debut on Daughters as Cetta.

She also made guest appearances such as in the 1996 sitcom, Seinfeld. She also took up a role in The Simpsons, as Sara Sloane.

Marisa Tomei got a critical appraisal in 1992 when she internationally appeared on the film My Cousin Vinny as Mona Lisa Vito.

In 2000s, Marisa Tomei’s career spiraled through commercial hits that brought millions of dollars. In 2000, she acted in ‘What Women Want’ in which she co-starred with Mel Gibson and Helen Hunt. In the year 2003, she acted ‘Anger Management’ and in 2007, she acted in ‘Wild Hogs’. After five years, she appeared in ‘Parental Guidance’. Other works include the 2005 Hanes campaign "Look who we've got our Hanes on now" where she worked besides Michael Jordan and other celebrities.

Marisa Tomei dated Robert Downey Jr in 1992. During 2008 and 2013, she has been dating Logan Marshall-Green. In 2009, Tomei is quoted saying, "I'm not that big a fan of marriage as an institution, and I don't know why women need to have children to be seen as complete human beings.”