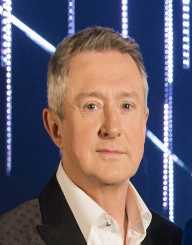 Michael Louis Vincent Walsh was born in Kiltimagh, County Mayo,Republic of Ireland on 5th August 1952 to Frank and Maureen Walsh. Walsh came from a working-class background. His father was a taxi driver and delivered milk as well. Louis Walsh had eight siblings, and he was the second oldest.

Louis Walsh joined Tommy Hayden Enterprises when he was 19. It meant moving to Dublin, but it was a necessary move for Walsh to advance his career.

In 1979, Louis Walsh signed Johnny Logan into the Tommy Hayden fold. He talked Logan into entering Eurovision in 1980, which he did, and he won. Soon after, he released his first album which went straight to number one across eleven European countries. Walsh was on his way to becoming very well known.

He continued to grow his portfolio of artists and enjoyed the success they had. Then, in 1999, Ronan Keating decided he would leave Boyzone and launch his solo career. Walsh continued the management of Keating, as well as working with him. Keating assisted in the production of some of Westlife’s songs.

In 2000, only 12 month later, Walsh and Keating parted ways due to a disagreement. In 2001-2002, Walsh moved onto television and was involved in “Popstars.” Two years later in 2004, Louis Walsh began as a judge on the global television hit show, The X Factor. He coached the winners of both season one and season two. Both artists went on to achieve hit singles and albums in the UK charts.

After only one season, Louis Walsh resigned from the show mid-season in 2005, unhappy with the treatment he was receiving. He did, however, continue to manage some of the acts that appeared on the show. Two other judges replaced him, but the show was apparently not the same, because Simon Cowell re-hired Walsh for the 2007 series, and he returned each season through to 2014.

In 2014, Louis Walsh announced his resignation from the show, which was amid rumors he had been sacked. He had 2015 out of the limelight but returned once again as a judge in 2016. Between 2004 and 2010, Walsh made guest appearances on several television shows, but his focus had always been on managing musical artists, which he did very well.

The two most important bands in Walsh’s management career would be Boyzone and Westlife.

Louis Walsh auditioned and interviewed young artists, and put Boyzone together himself. Britain had “Take That” as one of the most popular boy bands, and Boyzone were the Irish equivalent and went on to great success, becoming the major competitor to Take That.

His other great success was discovering Westlife. In the late 1990’s, Walsh put the band Westlife together, and they also went on to enjoy enormous success.

Between all the artists he managed, Walsh had 28 number one hits to his credit.

Walsh has had a flourishing career from the moment he stepped into the artist management arena. Once he moved to Dublin, he never looked back. Walsh has been able to put his own hugely successful bands together to manage and has continually added other successful artists to his portfolio as he has progressed. Being involved with The X Factor enhanced this as well, as he managed some of the artists that appeared on the show.