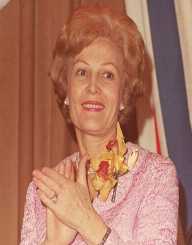 Thelma Catherine Ryan was born in the town of Ely, Nevada, on March 16, 1912. Her mother, Katherine, was a homemaker of German descent. Her father, William, was a miner of Irish descent. He gave her the nickname “Pat” because she was born on the day before Saint Patrick’s Day. Although she never legally changed her name, she referred to herself as Pat or Patricia her entire life.

Her mother died when she was 12, and her father died when she was 17. She took the responsibility for her siblings. Pat Nixon took care of the household and the family farm. She also got a job as a janitor and bookkeeper at a local bank. She attended the Excelsior High School and the Fullerton Junior College. She started studying at the University of Southern California in 1931. To pay for her education,

she worked as a typist, a sales clerk, and a variety of other jobs. She even appeared as an extra in films such as Becky Sharp, Small Town Girl, and The Great Ziegfeld. In 1937, she graduated with a degree in merchandising. She also got a certificate to become a high school teacher. She started teaching in a school in Whittier, California.

In Whittier, Pat Nixon joined a small theater group. There, she met Richard Nixon, a lawyer and recent graduate of Duke University. He adored her, and he asked her to marry him on their first date. She rejected him. They dated for two more years. They got married in Riverside on June 21, 1940.

The couple lived in a small apartment in Whittier. When World War II began, they moved to Washington D. C. Richard worked as a lawyer for the Office of Price Administration, and Pat was a secretary for the Red Cross. They then moved to San Francisco. He served in the U. S. Navy, and she worked as an economic analyst.

In 1946, Richard won a seat in the U. S. House of Representatives. That same year, Pat had their first daughter, Patricia. Two years later, she had their second daughter, Julie. After that, her husband became a Senator.

In 1953, Richard became the Vice President of the United States, serving under President Dwight Eisenhower. When he was accused of receiving illegal campaign donations, he gave a speech together with his family. This was Pat’s first national appearance on television.

In 1960, Richard ran for President, but he lost to John F. Kennedy. Pat’s disappointed reaction was captured by the cameras. Two years later, he ran for Governor of California, and he lost again. In 1968, he finally won the Presidential race.

Pat Nixon was very active in her efforts as First Lady. She encouraged young Americans to help their communities by volunteering. She supported organizations that helped handicapped people, and she helped develop several parks. She traveled to dozens of countries.

Pat Nixon visited hospitals and orphanages. She visited Vietnam during the war and Peru after the great earthquake in 1970. She made the White House more accessible to normal people. She ordered pamphlets in languages other than English. She redecorated many of the rooms and she added more than 600 works of art.

When the Watergate scandal broke, Pat Nixon encouraged Richard to fight the impeachment. She still supported him when he resigned.

In 1974, the family moved to San Clemente, California. In 1976, Pat Nixon suffered a stroke which damaged her health. After that, she and Richard moved to Manhattan. They ultimately ended up in New Jersey. Her health worsened. She had another stroke and a lung infection. She was soon diagnosed with oral cancer and lung cancer.

Pat Nixon passed away on June 22, 1993. Her husband and daughters were by her side. Her funeral was attended by many political figures. Richard passed away ten months later.

Pat Nixon was praised for her manners and friendliness. She was also known for her hard work and polished appearance. She was idealized as the perfect wife and mother. An elementary school and a park in California are named after her.