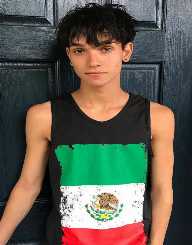 Lucas Dobre was born on 28 January 1999 in Gaithersburg, Maryland, United States. He is the son of Boz Mofid and the famous American gymnast and champion Aurelia Dobre. Lucas Dobre was born an American citizen alongside his twin brother Marcus Dobre and two other siblings. The two brothers began dancing at a young age with the inspiration and training from their mother, Aurelia Dobre. Lucas and Marcus slowly gained popularity on the internet for creating and uploading dance videos on vine to their channel known as Twinbotz.

Their trending videos had attracted many viewers by 2014 December with a great number of people numbering to 300,000 following these performances on the internet. Their skills had grown, and by June 2015 the number of followers had increased by 400,000 making it 700,000. Their channel ‘Twinbotz’ had become one of the people’s favorite with the number of followers shooting up to 1.7 million people in one year.

The skills Lucas Dobre had acquired in dancing were contributed majorly by his mother which propelled him to fame. He had learnt several moves from his mother which were associated with gymnastics. Combining his skills and his mother’s made his dancing moves and performances unique and creative. Together with his twin brother Marcus, the two created several videos which they uploaded on their channel on Vine including ‘When Your Mom is Better Than You.’

Lucas and Marcus are still in their teens, but their popularity is no match for many other young people their age. They began dancing and created their channel on the vine, and to date, the number of followers has accumulated to 1.8 million. Lucas is also on other social platforms like Instagram with over 800,000 followers and Twitter having more than 31,000 followers.

As an old creed states, that twins can read the minds of each other merely because they are twins is not different between Lucas and Marcus. The two are unique, and Lucas Dobre can quickly read through his twin’s mind and interpret his next move especially when doing a dance performance. Lucas has become so popular and famous at a tender age with his unusual dance moves gaining worldwide acclaim. Their way of dancing is what intrigues many of their followers because it is well choreographed. Sometimes it is hard to differentiate between Lucas and Marcus especially when they have the same dress code.

Lucas is a simple-minded youngster who minds his own business and loves coming up with something new each day. He loves his family and avoids having problems with people around him since he believes in living peaceably with people. Until now Lucas has not yet been caught up in a scandal like many youngsters his age have. He believes in himself and has great dreams about his career which he perceives will grow to attract many more followers.

Lucas Dobre is an American citizen, but he also traces his roots from Romania since his mother is of Romanian descent. His mother came to the United States in 1991 where she fell in love with Boz Mofid, Lucas’ father and the two settled in marriage in 1992. Apart from his twin brother Marcus, Lucas has two other older siblings Darius and Cyrus who have been supportive in nurturing his talent.

His mother is also a dance teacher who imparts dancing skills to many people both young and aged in Maryland. The family has a gym in Maryland where Lucas Dobre and Marcus learnt many of their dance moves under the training of their mother. Lucas does not have someone special in his life. He says it is still too early to have a girlfriend and besides he is still very young to think about marrying. Lucas Dobre is only 19 years of age presently.