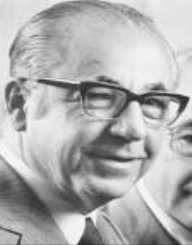 Ernest Gallo was born 18th March 1909, to Giuseppe and Assunta Bianco Gallo. He was born in Jackson, California, in the United States. He had two brothers, Julio and Joseph. His parents came from wine families. His mother’s family were winemakers, and his father, along with his uncle, managed the Gallo Wine Company, which distributed wine.

In 1933, Gallo’s father shot his mother and then killed himself.

The brothers grew the business until they had about 25% of the market in the U.S. They introduced around 16 brands into the marketplace, including Thunderbird, Ripple, and Boone’s Farm in the early days. As time passed, although the earlier brands had been criticized, some of their later brands included Hearty Burgundy and Chablis Blanc, which were well received.

In 1981, Gallo and Julio produced a premium-quality chardonnay, and during the 1980s they also expanded into medium-priced wine coolers. The brothers owned almost 50% of the vineyard land in California and were reported to have annual revenues of over one billion dollars.

Their other brother, Joseph, started a cheese factory, but when he used the family name, the brothers sued him for trademark infringement. He counter-sued to say he had been cheated out of one-third of the family business, but he lost his case as he had only been 13 years old when Gallo and Julio started their winery business.

In 1994, Ernest Gallo and Julio released a book, Ernest& Julio: Our Story.

Ernest Gallo married Amelia Franzia in 1930. The couple had two sons, David and Joseph. They were married until 1993.