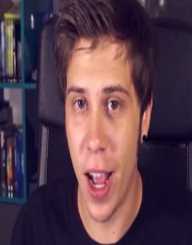 Ruben Doblas Gunderson known by his pseudonym elrubiusOMG or EI Rubius hails as a YouTube star and social media personality. His incredible work and affluence led him to be named as the YouTuber of the Year in 2016. With over 22 million subscribers in his channel sky is the limit. He is vastly known for his gameplays, tours, challenges and broad array of questions. In partnership with his best friend called Miguel Angel, the two have taken hold of online application around the globe. In fact his channel rockets as the most subscribed in Spain. This is what made him be crowned as YouTube star. To date, he has over 6 billion views and over 700 videos. Aside from his YouTube channel, he is also active on other accounts such as Instagram where he holds 5 million followers. His fans and viewers just can’t get enough of him.

Born as Ruben Doblas Gundersen, he was first seen in the world on 13th, February 1990 in Mijas Spain. His father is a Spanish descent while his mother is a Norwegian. It was at his tender age that his parents parted ways. This forced him to move to Norway, but he currently resides in Spain, Madrid.

His zest for social media made him meet Miguel, and the rest is history as they say. They have come to rule the social media world by storm. While still at school, Rubius did a wide array of jobs hence turning him into an active lad. He is quite vast when it comes to speaking in English, Norwegian and Spanish.

Rubius and Miguel encouraged each other to open their social accounts. But Miguel inspired El to try it out. It was here that he opted to start a YouTube Chanel. Miguel chipped in as a helper where the two chose to share their jokes on the said platform. It was in 2006 where Rubius opted to upload his first video under a moniker called Rubius. After some time he came up with his second channel titled as ElrubiusOMG in 2011.It was here that he took extra time to upload a wide array of gameplay videos especially The Elder Strolls which rose him to fame. Ceasing was something that Rubius didn’t include in his dictionary. By 2013 he had over a million of subscribers.

With massive of followers and fans on his side, Rubius opted to create other accounts. He first started with a six-minute video application called Vlog followed by Instagram account. In 2014 he authored a book titled The Troll Book. It was the same year that his book was declared as the bestselling piece at the Madrid Book Fair. In the mid of 2015, he authored a comic book called ElRubius. It is a superhero book that inspired him to venture into video games. His second section of the book is called Virtual Hero 2 followed by The Impossible Tower in 2016.As a multitalented persona, El starred in a movie called Torrente 5.

Aside from his humoral moves and comic timing, Rubius comes with a unique and straightforward personality that is accepted by all. His zest for greatness makes him surpass all Vloggers and YouTuber stars. There is no doubt that he is the game-changer when it comes to social media sensation. Though competition seems to have been its ultimate failure, he distinguished himself as the ultimate choice. His originality and simplicity allowed him to be an all-time favorite.

I can fully attest that Rubius is a star in the making. His enthusiasm has attracted young audiences to subscribe to his channel. Unlike other YouTubers, Rubius perfectly knows his path and what his subscribers and followers want. For this reason, quantity isn’t part of his entertainment, but quality rules his world. His videos are well illustrated with high-quality content that makes one view continuously. He is not a vagabond or a hobo when it comes to stardom. In fact, he is the real definition of a principal performer.

Though he is granted as the greatest personality, Rubius has already welcomed himself into the world of fame. Aside from him sharing tons of information online, little is known about his personal life. There is no doubt that he loves to play video games to the brim and he loves to spend time with his cat, Kitty. His favorite color is green, and his all-time dessert is chocolate ice cream. When it comes to his love life, Rubius doesn’t seem to have a lover.