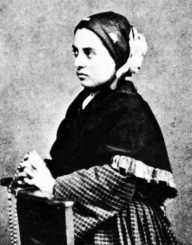 Bernadette Soubirous was born in January 1844. Her place of birth was Lourdes in Hautes Pyrenees situated in France. She was the first born to Louise and Francois Soubirous. Her father earned a living as a miller. He died in 1871. Her mother, on the other hand, served as a laundress. She died in 1866. Bernadette Soubirous had eight younger siblings. Bernarde Casterot was her godmother. She was the sister of her mother, Louise.

She was only two days old when she was baptized. This was done in St. Pierre’s, a local parish church. Soubirous did not have an easy childhood for she often fell ill. She initially had a digestive problem and later suffered from cholera before contracting acute asthma. She received her education in Nevers from the Sisters of Charity and Christian Instruction.

Bernadette Soubirous had 18 visions. The first one was on February 11th, 1858 which was called aquero. She was 14 years old at the time. She received the vision when she had accompanied her friends to gather firewood. This was in the grotto of Massabielle. In the vision, a lady appeared to her, and she was the only one who could see her. Her friends were busy with their activities for they did not see what was going on. Three days later after the incident, she returned with her friends to the spot where the incident had occurred. She once again saw the beautiful lady and went into a trance. Despite her efforts to make her friends believe what she saw, they could not believe her.

Bernadette Soubirous went back for the third time to the grotto on 18th February. The aquero appeared to her again, and she once again went into a trance. The lady instructed her that for a fortnight she has to visit the spot every day. Her mother forbade her against what the lady instructed her, but still, Bernadette chose to visit the spot each passing day for a fortnight.

Other visions later followed which were named la Quinzaine sacrée. It was also known as a holy fortnight. Most of the people did not believe her visions until her 17th vision. Nin this vision she described her vision to the people of her village. Her description of the lady she saw in the vision was an exact match of the Virgin Mary which was in the village church.

During her vision of February 25th, the lady instructed Bernadette to dig on the mud at in the grotto. She followed the instructions and to the surprise of many water sprung up. Though the water was quite muddy, she was asked to eat an herb that was in the water and also drink some of the water. A day later the water was crystal clear.

Her visions with time got the attention not only of the Catholic churches but also of the French government. Investigations were then conducted concerning her visions. In 1862 it was confirmed that indeed her visions were authentic. This was followed by the construction of many churches and chapels as per her request in her visions. Bernadette Soubirous became quite famous since then, something that she did not appreciate. She, therefore, chose to disappear from the public by busying herself in a hospice school. While there she was taught how to read and write.

Bernadette Soubirous took her last breath on April 16th, 1879. She was 35 years old at the time of her death.