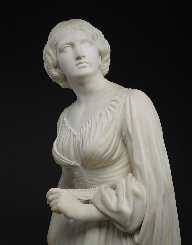 Godiva was born 990 AD, in Mercia. She married Leofric, the Earl of Mercia, and the couple had a son, Aelfgar.

The Liber Eliensis of Ely Abbey listed Godiva as a widow when she met Leofric.

The couple was very generous with their donations to religious houses. Leofric established a Benedictine monastery in 1043. There was a convent in Coventry that the Danes destroyed in 1016. Due to this, Leofric built the monastery on the same site.

Godiva played a large part in founding the monastery. The couple supported various monasteries, in places such as Chester, Eyesham, and Leominster, among others.

Godiva's husband died in 1057. As a result, even though the Norman Conquest had taken place, Godiva was the only woman to have significant land holdings. She was also one of the few Anglo Saxons to have land.

Legend dictates that a naked Godiva rode a horse through the streets of Coventry. She rode in protest against her husband, who oppressed the citizens with his heavy taxation. Despite repeated requests, he initially ignored Godiva's please to lessen the taxes.

He said he would grant her request, but only if she rode naked through the streets. Godiva decreed that everyone must stay inside and not look out. The tailor disobeyed her, and he became known as Peeping Tom – a term still used today.

The ride does not receive mention until 200 years after Godiva's death. Meanwhile, historical records frequently mention her charitable giving. Due to this, historians disagree as to whether the ride happened or not.