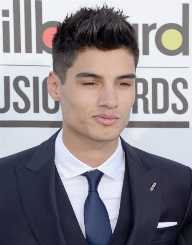 Musician Siva Kaneswaran was born on the 16 November 1988 in Blanchardstown, Dublin, Republic of Ireland. He has seven siblings including a twin brother Kumar. His father is Sri Lankan and his mother, Irish.

Siva Kaneswaran began working as a model with Storm Model Management when he was sixteen years old. The combination of his Irish and Sri Lankan genetic makeup produced a strikingly good-looking young man who caught the eye of modeling talent scouts. Kaneswaran appeared on the runway at fashion shows as well as in various advertising campaigns. Siva Kaneswaran later turned to acting, appearing in Rock Rivals (2008), a UK drama series where he acted alongside his twin brother. The twins also acted in an episode Uncle Max (2008). He was then invited to take part in an audition which was taking place in England and Ireland to find members for a new pop group. The group became The Wanted.

Members of the group were Jay McGuiness, Tom Parker, Nathan Sykes, Max George as well as Siva Kaneswaran. Their debut album, The Wanted reached number 4 on the charts in the UK. They also had two number 1 hits in a row with All Time Low (2010) from their first album and Glad You Came, from their second album Battleground (2011). In 2013 he was the producer of seven episodes of The Wanted Life. During 2017 he appeared as himself in the television series Celebrity Hunted.

Siva Kaneswaran has been in a long time relationship with Nareesha McCaffrey.