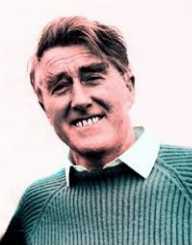 Self-styled monarch, Prince Roy of Sealand was born Patrick Roy Bates was born on the 29 August 1921.

Roy Bates joined the International Brigade at 15 and went to Europe to fight in the Spanish Civil War (1936-1939). Returning home unscathed, the teenager found work in Smithfield Meat Market in London. He then joined the British Army and saw service during World War II (1939-1945) in Africa, Italy, Iraq, and Syria. On discharge, he was an Infantry Major in the 8th India Division.

Returning from the war, Roy Bates operated a fishing fleet off the coast of Essex, England, ferrying meat and rubber between the UK and Ireland. Then in the mid-1960s, he got involved in pirate radio. He was aware of Radio Caroline and Radio London which were operating successfully. His research also led him to discover that King Radio and Radio City were operating from anti-aircraft forts on the Thames Estuary.

He decided to start his pirate radio station located on the Thames Estuary, off Southend, Essex, Fort Knock John which had been built by the Royal Navy during World War II.

During the 1960s and 1970s, Roy Bates acquired a second fort, Roughs Tower, off Harwich which the British Government had no jurisdiction over. He renamed the fort Sealand and proclaimed it to be the world’s smallest country. In time, Sealand had its flat, football team, stamps, and money. It even had its national anthem. Because he disliked modern pop music, his Radio Essex station did not appeal to the younger generation, who had turned away from the music their parents listened too.

The British Government had a number of ideas on how to deal with Sealand but mostly turned a blind eye to it. Later various foreign business partners tried to capture Sealand, and when they were unsuccessful tried to sue Sealand and Bates. Alexander Achenbach, a German businessman, invaded Sealand in 1978. Along with a group of Dutch and German citizens, they invaded Sealand and took Bates’ son Michael hostage.

Roy Bates and his group fought back, freed Michael and recaptured the fort. He then arrested the  Dutch and Germans, declaring them to be prisoners of war. Because one of the prisoners held Sealand citizenship, he was accused of treason and held while the other prisoners were released. Germany and Britain had a flurry of diplomatic activity which resulted in the release of the last prisoner.

Since 1987, Sealand lies in the United Kingdom’s territorial waters. Bates moved back to the mainland when he was of retirement age, nominating his son Michael as regent.