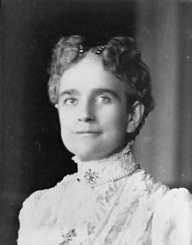 Ida McKinley was a United States first lady from March 1897 to September 1901, as the presidential wife of the 25th president William McKinley.

Ida McKinley was born as Ida Saxton on June 8, 1847, in Canton, Ohio. She was the daughter of a prominent businessman James Saxton and his wife Catherine. She went to a local public school and later graduated from the private school Brooke Hall Seminary in Pennsylvania. Soon after her graduation, she left for a tour of Europe with her younger sister. Ida was a strong-willed young woman who spent her life exploring new ventures. Her personality irked most of her father’s workers who considered her ill-mannered.

She wound up her European tour and returned back to Canton. At the request of her father, she decided to work at her father’s bank in Canton. She was employed as a cashier. Ida got admiration from many for working for a living instead of relying on her father, as was common for middle-class women. She became noticed easily for her courage in a working field dominated by men.

Ida met a young lawyer and newly elected Stark County Public Prosecutor, William McKinley. The two got married on January 25, 1871, in a Presbyterian Church in Canton. She had two daughters who died in their childhood. Their first daughter Katherine was born on December 25, 1871. The second daughter also named Ida was born in April 1873.

She started suffering from bad health after the delivery of her second child. She lost her mother a few weeks before the birth of her second child. The second child was often sickly since her birth. She died four months later in August 1873. Her ill health worsened after their only daughter Katherine died of typhoid in 1874. Ida became morose and secluded. Gradually, her illness gave way to epileptic seizures. The seizures and constant fainting manifested into her adult life.

McKinley restructured his life to accommodate her tight caring routine. He became overprotective to the discomfort of his staff at the prosecuting office. Despite her ill health, she made considerable campaign tours with her husband during his election bid in 1876. McKinley vied and won a seat in the US Congress. Ida moved with her husband to the US capital as a congressional wife. Her health improved considerably in the next four years. Ida helped her husband during the 1892 Ohio gubernatorial campaign elections.

When McKinley became the Ohio governor in 1982, Ida retired away from the public limelight. She spent most of her free time pursuing her childhood hobbies of sewing and crocheting of clothes and slippers. She gave them out as souvenirs to her close friends and charitable organizations for auction. Though the Ohio state staff knew of her condition, few publicly talked about it. Her condition curtailed the movement of the governor who took personal responsibility for her caring.

In 1896, McKinley won the Republican Party presidential nominations. Ida gained courage and featured extensively in her husband’s campaign rallies across the country. She endeared the hearts of many citizens for her energy during the tours. The party used her energy to counter rumors of her ill health. McKinley won the presidency and took office in 1897.

Her health deteriorated after becoming the US First Lady. She kept out of the public save for the official functions with the president. Like before, the president kept close to her for her own safety. Ida appeared in most functions seated next to the president. In the routine welcoming of guests duties, Ida sat down and rarely shook hands with the guests. Nonetheless, she graced almost all state dinners and banquets hosted at the White House.

Ida delegated the other social and ore demanding duties to the vice president’s wife Jennie Hobart. Mrs. Hobart represented her well in all her duties. Even in her sickly state, Ida kept her mind up to date with current domestic and world affairs. She influenced some major decisions during her husband’s stay in power. Ida prevailed over her husband to send the US military into Cuba in 1898. As a devoted Christian, she encouraged her husband to commission US missionaries to the Far East.

McKinley displayed utmost care for his wife. He became the unofficial talk of Congress for his dedication for his wife. Congressional wives admired his zeal for his wife. The congressional husbands, on the other hand, tried hard to keep with his pace. In September 1901, Ida accompanied her husband to New York. President McKinley was shot while on a tour of Buffalo City in New York. He pleaded with his staff to be humane in delivering the shocking news to his wife who was absent at the time.

She returned home in Canton after the death of her husband. Ida was cared for by her younger sister for the rest of her life. She suffered more severe seizures as the years went by. On May 26, 1907, Ida McKinley died in her Canton hometown. She was buried next to her husband and two daughters in the family burial site.

In 1998, the family house she grew in and lived briefly with her husband in Canton was gazetted as a US national heritage site. It became the property of the US First Ladies National Historic Sites.