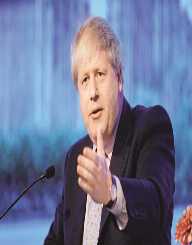 Alexander Boris de Pfeffel Johnson was born on 19th June 1964 to Stanley and Charlotte Johnson. His father was in university at the time studying economics. His mother was an artist. His parents were English, but living in Manhatten, New York at the time of Boris’ birth.

He was the eldest of four children with a sister, Rachel and two younger brothers, Leo and Jo.

As a child, Boris Johnson was moved around to accommodate his father’s work. In five years, the family moved from New York back to Britain and North London. From there back to Washington D.C., then to Connecticut, followed by another move to the Nethercote in the UK and then to North London again.

Boris Johnson didn’t see much of his father and was brought up mostly by his mother with the help of nannies. The family was comfortable, being classified as an upper middle class. In 1969 Johnson’s father went back to study to do post-doctorate research, and Boris went back to the farm in Nethercote with his mother and siblings. Then, in 1974, his father managed to get himself work with the European Commission, and the family moved to Brussels.

Boris Johnson learned and became fluent in French. It was around this time that his mother was diagnosed with clinical depression, and in 1975 Johnson was sent off to boarding school. As a studious child, he loved Ancient Greek and Latin. His parents’ relationship ended in 1978, with a divorce to follow in 1980. He was very fortunate to have studied at the prestigious colleges of Eton and Oxford, and even more fortunate to have won scholarships to both.

With Eton, he was awarded the “King’s Scholarship” to study there, which he did for four years. He had a year off and was then awarded a literary scholarship to do a four-year course at Oxford.

During his time at both colleges, he studied literature and philosophy.

Following on from his successful studying of literature, the classics and philosophy, Johnson joined the college newspaper as a journalist and soon became the editor. From there, through a connection, he became a Graduate Trainee Journalist for The Times but was sacked soon after. He made up some untrue claims and got caught out.

Through yet another connection his next job was as a journalist for The Daily Telegraph. His writing had a unique style and appealed to the reading demographic of the newspaper. In 1989, he moved to the Brussels bureau of the paper. He became one of the few journalists that spoke his mind.

After returning to England when he married, Boris Johnson was made the assistant editor and chief political columnist at The Daily Telegraph. His column gained popularity due to his unique writing style, and he even won an award for it.

In 1999, The Daily Telegraph’s sister publication, The Spectator, offered Johnson the role of editor, but it was on the condition that Johnson gave up any aspirations to a political career. Johnson, of course, agreed. The job didn’t go particularly well, with staff continually complaining about Johnson’s style of running the show.

Boris Johnson first thought about going into politics in 1993 in the European Parliament elections, but due to circumstances didn’t end up running. He found a seat closer to home in the UK, but when he ran in 1997, he lost to the Labour candidate. Not surprising, as it was a safe Labour seat. He was then shrouded in controversy when a private phone call with one of his friends was made public. Johnson denied the wrongdoing.

Even though Boris Johnson had agreed not to move into a political career while he was editor of The Spectator, he ran as the Conservative candidate in the seat of Henley when the sitting candidate retired. The Conservatives were split over his candidacy because he was a polarizing personality, but he ran, and he won.

His political career was born. He won his re-election for the seat of Henley in 2005, increasing his majority.

He supported David Cameron that same year as successor when Howard stood down as Conservative leader after losing the election. Cameron was elected and appointed Johnson as the Shadow Minister for Higher Education.

In 2008, Boris Johnson decided he would run for Mayor of London, which he won. He also won his second term, so served as Mayor until 2016. He had some successes but was also plagued by controversy during his time as Mayor.

In 2015, Boris Johnson again ran in a safe Conservative seat to re-enter politics in the House of Commons, and he won the seat. He then began to campaign for England to leave the European Union.

Following the “Leave” vote winning, Theresa May became Prime Minister. She appointed Johnson as Secretary of State for Foreign and Commonwealth Affairs in July 2016. Some world leaders welcomed the appointment; others were openly dismayed.

Boris Johnson met his first wife, Allegra Moyston-Owen when he was a member of the Bullingdon Club in College. The club was a drinking society, mostly upper middle class. He got engaged to Moyston-Owen in 1987.

When he was working in Brussels, Moyston-Owen left him in 1990 and went back to London. They tried to reconcile, but it didn’t work out, and they got divorced in 1993.

By this time, Boris Johnson had entered a new relationship. A friend he had known since childhood, Marina Wheeler, had also moved to Brussels and they began to see each other. They were married in 1993 and moved to North London, where they raised four children.

In 2004 there was scandal as the British press accused Johnson of having had an affair for several years with one of the journalists at The Spectator. He continued to attract attention from the media for the wrong reasons, but it didn’t hurt him as he went on to win re-election in his seat by an even larger margin in the 2005 elections.

Boris Johnson has already had a major impact on the British people.

In 2004 he supported the call to impeach the British Prime Minister, Tony Blair, for the role he had taken in the invasion of Iraq.

In 2016, he supported the call for England to exit from the European Union, which it is now in the process of doing. This not only had a major impact on England but sent ripples around the world as everyone tries to come to grips with the changes that will take place.

Boris Johnson has often been plagued by controversy but has ploughed on, doing his own thing. Whether people agree or disagree with him, Johnson says what he thinks and does what he wants. He had a leading hand in one of the most important moments in British history.