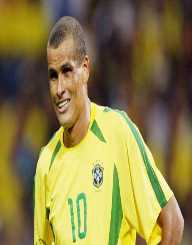 Rivaldo is a Brazilian footballer who is best known for being part of the 2002 World Cup winning Brazilian team.

Rivaldo was born as Rivaldo Vítor Borba Ferreira in Recife on 19 April 1972. Rivaldo’s family lived in abject poverty and he suffered from malnourishment during his childhood. Rivaldo loved football as a child, but was considered too frail by many to make it as a professional. He joined a local club Paulistano at the age of sixteen.

Rivaldo played his youth football with Paulistano but began his professional career with Santa Cruz. He played a few games with Santa Cruz before transferring to second division club Mogi Mirim. His ten goals in thirty games for Mogi Mirim attracted the interest of Corinthians who signed Rivaldo on loan in 1993. He scored eleven goals in thirty games during his loan spell. Brazilian champions Palmeiras then signed Rivaldo in 1994. Rivaldo spent two successful years with Palmeiras scoring twenty-one goals in forty-five games. After two seasons with Palmeiras Rivaldo moved to Europe.

Rivaldo signed with Spanish club Deportivo La Coruna. Rivaldo was an instant success and scored twenty-one goals in forty-one games for the club. So successful was Rivaldo that Barcelona paid Deportivo twenty six million pounds for his services. It was with Barcelona that Rivaldo became a global star. He was hugely successful with the Catalan club. Rivaldo played 34 times in his first season with Barcelona and scored 19 goals as Barcelona won both the Spanish league and the Spanish cup. The following year Rivaldo increased his goalscoring tally to twenty-four.

Rivaldo became one of the most talked about players in Europe and was linked with a host of clubs. Rivaldo had a strained relationship with Louis van Gaal, Barcelona manager from 1997 to 2000, as he played him out of position. Despite this Rivaldo continued to score goals. Van Gaal was fired in 2000, and Barcelona suffered a decline as a series of short term managers came and went. This had little impact on Rivaldo as he scored 23 goals in the 2000-2001 season and finished as the second top scorer in L Liga.

Van Gaal returned as manager in 2002 and released Rivaldo from his contract. He left Barcelona having scored one hundred and eleven goals in two hundred and three appearances. Rivaldo chose to move to Italian giants A.C Milan. Rivaldo played just two seasons in Milan but did win the European Champions League and the Italian cup with A.C. Milan. Rivaldo left A.C.Milan in 2004, and after briefly returning to Brazil he signed with Greekk club Olympiacos. Rivaldo played three years with Olympiacos and scored some memorable goals both domestically and in the Champions League.

Rivaldo was released by the club in 2007 as it was claimed he was too old to play at the required level. Another Greek team, A.E.K Athens signed Rivaldo. Rivaldo left Greece at the end of his first season with A.E.K as they were stripped of the title after Olympiacos were awarded three extra points following a court case as one of their opponents had fielded an ineligible player. Rivaldo then moved to Uzbekistan when Bunyodkor offered him a bumper ten million euro two-year contract.

Rivaldo was prolific in the Uzbek league scoring 33 goals in 53 games. In 2010, Rivaldo returned to Brazil and Mogi Mirim. The last few years of his career were nomadic as he spent a season with Mogi Mirim, Sao Paulo, Kabuscorp and Sao Caetano. Rivaldo returned to Mogi Mirim in 2013 as president. He made one more appearance for the club and then retired in 2015.

Rivaldo made his debut for the Brazilian national team in 1993. He also scored in his debut game against Mexico. Rivaldo scored three goals in the 1998 World Cup Finals and was named on the team of the tournament as Brazil lost the final to hosts France. He won his first international trophy in 1999 as Brazil won the Copa America. Brazil was retaining the trophy, but Rivaldo had not been part of the 1997 winning team.

Rivaldo often received heavy criticism from his fans and media for his performances with Brazil. However, he was a star of the 2002 World Cup Finals as he scored five goals as part of the ‘Three Rs’ attack of Rivaldo, Ronaldo, and Ronaldinho. Brazil won the World Cup defeating Germany in the final and Rivaldo again made the team of the tournament. His performance was somewhat marred by his theatrics getting Turkish defender HakanÜnsal sent off. Rivaldo was fined after the game for collapsing clutching his face after Unsal had kicked a ball at his thigh.

Rivaldo retired from international football in 2003. He played seventy-four times for Brazil and scored thirty-five goals.

Rivaldo had a highly decorated career and won numerous awards as an individual player and as a member of a club. Rivaldo won nine national league titles during his career, one in Brazil, two in Spain, three in Greece and three in Uzbekistan. He won six national cups, one in Spain, one in Italy, two in Greece and two in Uzbekistan. He also won a UEFA Champions League with A.C. Milan.

At international level Rivaldo won a bronze medal at the 1996 Olympic Games, a Copa America in 1999, where he was named most valuable player, and a World Cup in 2002. Rivaldo was named world player of the year in 1999 by FIFA and the BalonD’or. Rivaldo was the top scorer in the 1999 Copa America, the 2000 Champions League and the 2009 Uzbek League. Rivaldo has been inducted in the Brazilian Football Hall of Fame.

Rivaldo married his first wife Rose Ferreira in 1993. Together they had a son, Rivaldinho. Rivaldinho plays with Mogi Mirim while Rivaldo was president and the two played together. Rivaldo divorced Ferreira in 2003 and remarried. His current wife is Eliza Kaminski.