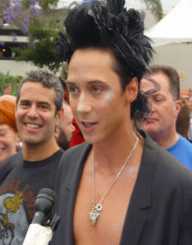 John Garvin Weir was born on 2nd July 1984, to John and Patti Weir. He was born in Pennsylvania, United States, in a town called Coatesville. He has a younger brother and comes from Norwegian heritage.

Johnny Weir took an interest in ice-skating, particularly figure skating, when he was 11. He took a great interest in Oksana Baiul when she won her 1994 gold medal at the Olympics. Weir began practicing on his own, and his parents enrolled him in some group lessons at the University of Delaware. Priscilla Hill, the coach on-site at the time, noticed his talent and began to teach Weir as a private student. Soon afterward, the family moved to Newark in Delaware, so that Weir could be close to his training rink and his coach.

He attended Newark High School, where he was an honor roll student. He then went to the University of Delaware where he studied linguistics on a part-time basis, but he eventually dropped out to concentrate on his ice-skating.

Johnny Weir was very talented and quickly worked his way up the ranks. His first major win was in 2001 at the World Junior Championships. He skated three clean programs, and won the gold medal. Later that same year he competed in the senior US Championships, and placed sixth. In 2003 whilst competing at the US Championships, Weir sustained a knee injury that forced him to retire from the competition. It was shortly after this that he changed clubs, from the University of Delaware FSC to the Skating Club of New York. During the 2003-2004 season, Johnny Weir qualified for the US Nationals. During the 2004 US Championships, he received his first score of 6.0 and went on to win the gold medal.

In 2004, Johnny Weir  won his first two Grand Prix titles – the 2004 NHK Trophy in Japan, and the 2004 Trophee Eric Bompard in France. The 2005 US Championships, he earned five 6.0’s, and was successful in defending his title. The next eight years, until his retirement from the sport, Weir continued to compete and win tournaments. He was plagued by several injuries, including a sprained ankle, back injury, and hip injury. As part of winning the 2006 US Championships, Johnny Weir was automatically named in the US Olympics team and US World team. He finished fifth overall at the Olympics and seventh at the World Championships due to his back injury. 2007 saw Johnny Weir  plagued by injury, which in the end cost him his title at the US Championships. was a disappointing year for Weir. He decided to make some major changes in his life. This saw him change to a new coach, and leaving home to move on his own to New Jersey, to train with his new coach.

Johnny Weir was named as part of the US Olympic team for the 2010 Winter Olympics. He finished sixth overall. didn’t compete during 2011, and although he returned in 2012, he withdrew with a recurring hip injury.

In 2013, on 23rd October, Johnny Weir  officially announced his retirement from skating.

Johnny Weir  published his autobiography in 2011, titled Welcome to My World.

Some of Johnny Weir  awards include:

Johnny Weir who is openly gay, married Victor Voronov in 2011. Voronov was a Law graduate. The couple then divorced in 2015.

Johnny Weir is a member of the Board of Governors of nPlay, which is a non-profit organization that fights childhood obesity and promotes healthier lifestyles for young people.

In 2010, Johnny Weir  worked to raise money for The Trevor Project, which is a non-profit organization that works on suicide prevention amongst the gay, lesbian, bisexual and transgender youth.

He also established the Johnny and Victor Weir-Voronov Scholarship Fund for LGBTQ youth, in conjunction with the Delaware Valley Legacy Fund, in 2013.