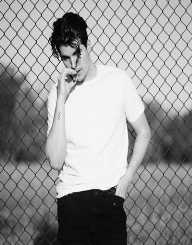 Christian DelGrosso was born on 24th May 1993, in Ontario, Canada. He has a brother, Julian.

In 2013, he was working at a sandwich shop, as well as taking acting classes. He stumbled across Vine, which is one of the newer social media platforms.

Christian DelGrosso posted a couple of videos to see what would happen, and his videos went viral. He had a following of 10,000, just one month after posting his first video. Since then, not only does he post his own videos, but he has also collaborated with other Vine celebrities such as Cameron Dallas and Matthew Espinosa.

A short four years later, he has over 1.4 million subscribers on YouTube, and over 3.2 million followers on Instagram. As can be seen, he is very active on both social media platforms.

Christian DelGrosso also starred in the movie, Mono, released in 2016.