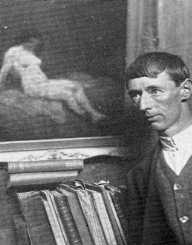 Norman Lindsay was born on February 22nd, 1879. He was famous for his talented nature in a wide array of fields including art, writing, sculpting, etching, and boxing. He earned high acclaim through this artwork. Before this, he had been criticized in sometimes for his highly controversial subjects and nudity.

Norman Lindsay was born on February 22nd, in 1879 in a place called Creswick, Victoria. His father, Robert Charles William Alexander Lindsay worked as a surgeon. His mother was called Jane Elizabeth Lindsay. She was the daughter of a reverend named Thomas Williams. Lindsay was the fifth born son in a family of ten.

When he was still young, Norman Lindsay was diagnosed with a blood disorder. This had a great impact on his life as he had to remain indoors and that he began drawing since then. Around the same time, he also accompanied his grandfather to Ballarat Fine Arts Public Gallery. This spurred huge interest in his artwork. In 1893, he enrolled with Walter Withers’ painting classes.

Norman Lindsay went for his early education at Creswick Grammar School. During this period, he was part of the editing team for the school’s magazine called ‘Boomerang.’ Later, with his brother’s advice, he began to take classes at the National Gallery School two years later. After a short period, he migrated to Melbourne. Here, he took the role of an illustrator in a weekly publication named ‘Hawklet.’

Norman Lindsay together with his brother went on to join Sydney Bulletin weekly newspaper in 1901. This is an association that would last for a period of up to 50 years. Eight years later, he moved to Europe and settled in Naples. It is at this place where he instigated the 100 pen-and-ink illustrations task. This was an illustrations job assigned to him by Petronius' Satyricon.

He took time to visit South Kensington Museum where he developed a special interest for model ships in his artwork. In 1911, he moved back to his hometown in Australia. After that, he authored The Magic Pudding. This was a children’s classic that was later published in 1918. Critics argued that his writing works demonstrated his openness, something that was also present in his artwork. Decades later, he went ahead and published Age of Consent – 1938. This book was however banned in his home country until 1962.

Aside from writing, Norman Lindsay was closely linked with numerous poets such as Francis Webb, Hugh McCrae, and Kenneth Slessor. He greatly influenced the direction of these poets through his ideologies that were published in Creative Effort. Some artists that he influenced were the likes of Frank Frazetta and Roy Krenkel.

He wedded Rose Soady in 1920. They welcomed two daughters in this relationship.