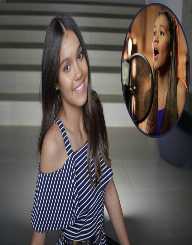 Alexa Curtis is an Australian singer who is best known for winning The Voice Kids Australia in 2004.

Alexa Curtis was born to parents Tony and Michelle Curtis on 4 January 2004. She has an older brother, Aidan, with whom she has performed in a stage production of Oliver! in 2012.

Alexa Curtis came to fame in 2004 when she appeared on the TV network Nine Network’s singing competition The Voice Kids Australia. Curtis was the youngest of the sixth finalists but ultimately emerged victorious. Her appearance on the show was the first time that Curtis received any professional training.

While on The Voice Kids, Curtis was mentored by the Australian singer Delta Goodrem. After winning, Curtis appeared at the Schools Spectacular, an Australian variety show, first with the other Voice Kids finalists and then performing a duet with the winner of The Voice Anja Nissen.

In 2015, Curtis appeared twice at the IGA Lord Mayor’s Christmas Carols, performing solo and then singing a duet with Napoleon ‘Polo’ Cummings. Curtis sang the theme song for six episodes of The Powerpuff Girls on Cartoon Network Australia. Curtis represented Australia at the Junior Eurovision Song Contest in 2016, ultimately finishing fifth with the song ‘We Are.’

Alexa Curtis is signed with the record label Universal Music Australia. She released her first single ‘Playground’ in 2014 and followed this up by releasing her Junior Eurovision song ‘We Are.’ Curtis has over twenty-one thousand followers on Instagram. Her songs on Youtube have also attracted hundreds of thousands of views.