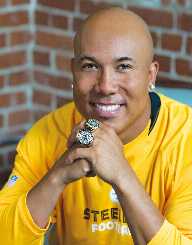 Hines Edward Ward Jr.popularly known as Hines Ward was born on March 8th, in 1976. He is famed for being a former American Footballer.

He earned his fame for playing the position of a wide receiver. Ward played for the Pittsburgh Steelers for a period of about 14 seasons. He hung his boots after playing in 2011.

Hines Ward was born on March 8th, in 1976. His birthplace was in Seoul in South Korea. His parents were of different descents as his father was African-American whereas his mother was South Korean.

When Ward was only aged one, he migrated with his parents to live in Atlanta, Georgia. Shortly after, his parents went separate ways. Hines Ward was left to be raised by his mother.

While taking his classes at Forest Park High School situated in Forest Park, Georgia, Hines Ward displayed his athletic skills more so as a quarterback.

Due to his talent in the game, he was credited as the Clayton County Offensive Player for about two years.

Thereafter, Hines Edward went along to play with the University of Georgia as a wide receiver. At the time, he landed himself as the second best player for the Bulldog’s team in the university’s history. This was because he had made 149 receptions in the 1, 965 yards he played.

During the 1998 NFL Draft, Hines Ward was regarded as one of the best receivers. His competitors were the likes of Randy Moss and Kevin Dyson.

Some of the teams that showed interest in him included the Indianapolis Colts and the Tampa Bay Buccaneers. Unfortunately, an earlier discovery was brought to light concerning the fact that Hines Edward had suffered a bicycle injury when he was young leaving him without an anterior cruciate ligament in his left knee. This greatly affected his value in the market as it quickly dropped.

Regardless, his knee condition did not prevent him from being signed by the Pittsburgh Steelers during the 1998 season. In July that year, he landed himself on a three-year deal worth $885,000.

Hines Edward played for the team not as the first receiver but as its fourth. His first professional game came in September in 1998 where he played against Baltimore Ravens. He did not perform well in his first season as he ended it with just 15 receptions.

Later, in 2001, Hines Edward earned himself huge fame for setting the team’s record with 94 receptions.

His remarkable performance earned him the credits of a Pro Bowl. It was also in 2001 when Ward steered his team to participate at the AFC Championship. Experience came as he played as he completed the following season with 112 receptions.

After a couple of seasons playing with the Steelers, in 2006 he was credited as the Most Valuable Player during the Super Bowl XL game against Seattle Seahawks. Three years later in 2009, he again led his team to win the Super Bowl XLIII.

Hines Ward is married to Lindsey Georgalas. The couple live together with ward’s son called Jaden. He is a product of Ward’s first marriage.