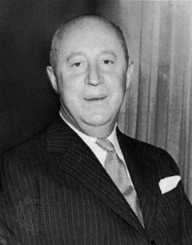 Andre Courreges is the French fashion designer who is credited with the innovation of many youthful designs like the miniskirt dress. With his trademark white color, he managed to transcend invisible barriers erected by the traditional fashion mindset of nobility in Europe.

Andre Courreges celebrated his birthday on March 9th; he was born in the year 1923, in Pau France. The young Courreges was raised in the mountainous Basque region of France in which Pau is located. Influenced by the natural beauty of his surrounding environment, Courreges wanted a career in art and design. His ambitions were put on hold when his father took him pushed him to pursue a degree in engineering.

In the advent of WW2, he fought for the French as a fighter pilot in the French Air Force. He graduated with a civil engineering degree at the age of 25 years.

In 1964, barely four years into his fashion line, Andre Courreges had established himself as one of the leading design houses in Paris. His runway designs were simple and elaborate. His idea was to create a fashion revolution by having ladies wear fitting apparel. Breaking away from traditional flowing European dresses, Courreges made designs that appealed to the youthful ladies. His concept of accessorizing with fashionable dark glasses was well received by the young Parisian ladies.

With a futuristic mind in fashion, Courreges was widely followed in France and Britain. His mini skirt and short blouse summer design in 1964 were widely copied in France and Britain. He then produced the trouser suit for the wealthy clientele. This was the feminist version of the male business suit. The female suit was widely received in Europe and the US. Due to the rampant imitations, Courreges decided to slow down on his production. He also made adjustments on his knitting techniques and type of fabrics used.

To expand his outreach in the globe, Andre Courreges partnered with the French cosmetic giant L’Oreal 1968. This expansion gave him a vast market that in 1972, he had over 120 shopping outlets all over the world. His clothing company was the official designer of the 1968 Munich Olympics staff gear.

Using his engineering and fashion design experience, Courreges got a contract to work with Honda. He was part of the team that designed the Honda TACT scooters in the 1980s.

With his artistic mind and engineering background, Andre Courreges managed to venture into the future. Most of his designs were inspired by creating a revolution in the fashion industry. He experimented with a wide range of materials. His hip tight trousers, transparent blouses, and short skirts were unseen in the traditional Paris fashion houses.

But his ideas managed to tap into the young and carefree minds of the growing Parisian girls. Apart from just wearing clothes, Courreges encouraged ladies to be elegant. He borrowed the idea of accessories from the space astronauts outfits. This made his simple often white garments blend well with the dark glasses, black hats, and assorted jewelry.

Andre Courreges got married to Coqueline Barriere in 1967. The couple stayed together until his death. Coqueline was his assistant at the time they got married. She was to become the financial manager of the family’s business empire. The couple had a daughter.

Andre Courreges died on January 7, 2016, in the outskirts of Paris. This was the culmination of a long battle with Parkinson’s disease.

Due to his input in the fashion industry, many young talented designers copied his style. They ranged from Calvin Klein, Paco Rabanne to Dolce and Gabbana. His influence was not only in the clothing line as evident with his Japanese ventures.

Andre Courreges used every part of his life experience to come up with a unique product for the public. To date, all the major fashion designers in Europe and America have based their philosophy on Courreges. Be simple, innovative and futuristic.

Courreges’ fashion pieces are subject of many exhibitions in Paris and all over Europe.