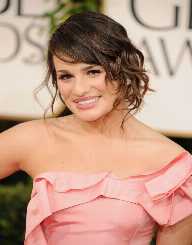 Lea Michele is an American actress who is well-known for her role as Rachel Berry on the TV show Glee. She is also a singer and an author.

Lea Michele was born on August 29, 1986. Her full name is Lea Michele Sarfati, and she is a Virgo. Her birthplace is New York. Her mother is a nurse, and her father is a deli owner. Michele got into acting at a very early age. In the Broadway version of Les Miserables, she played the role of young Cosette at the age of only eight years.

Lea Michele was also cast in Ragtime in 1995 alongside Audra McDonald. In 2004, she appeared in Fiddler on the Roof. Although she went to the New York University’s Tisch School, she decided to drop out to pursue a career in acting.

After having success in Broadway, Lea Michele appeared in Spring Awakening – a musical in which she played the role of Wendla Bergmann. She won a Drama Desk Award nomination for the role.

In 2008, Lea Michele performed Claudia Octavia in the musical Nero. Afterwards she decided to move to L.A. to expand her career and land TV & film roles. She wanted to appear as a guest actor in Grey’s Anatomy. Instead, she got the big opportunity to play Rachel Berry in Glee. She impressed the creators of Glee with her acting talent as well as her commitment when she arrived for the audition after just being in an accident. She earned her first Emmy nomination for this role in 2010.

For the next three years as the lead singer of the star cast of Glee, Lea Michele won several awards and nominations. She also appeared in the film New Year’s Eve opposite Ashton Kutcher in 2011. Her first single from her solo album Louder was released in 2013. It was titled Cannonball, and it debuted on #75 on the Billboard Hot 100.

Lea Michele also voiced the character Dorothy Gale in The Wizard of Oz: Dorothy’s return. In 2015, she joined the list of scream queens by appearing in a show of the same name. As of 2017, she made an appearance in the Hulu series Dimension 404. She also appears as Valentina Barella in The Mayor.

Lea Michelle has won several Emmy nominations, & Teens’ Choice Award nominations. She is the winner of the 2009 Satellite Award for Best Actress in a musical or comedy. She also won the 2009 Screen Actors Guild Award for Outstanding Performance by an ensemble with her cast members of Glee.

Lea Michele has been in romantic relationships with several of her co-stars. She first dated actor Theo Stockman from 2009 to 2011. After their split, Michele began a relationship with her Glee co-star Corey Monteith. The two were very happy together till Monteith died in 2013. He had a drug abuse problem and while in rehab, he lapsed and took heroine & alcohol which cost him his life. His death hurt Michele deeply, and she disappeared from public view for a few months.

In 2014, Lea Michele started dating Matthew Paetz. They split in 2016, after which she has been dating Zandy Reich.