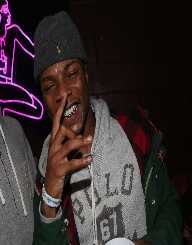 Rap artist Big Lurch was born Antron Singleton in Fort Worth, Texas in 1976. As a child, he displayed an interest in poetry and later wrote rap songs.

Big Lurch is serving a life sentence for murdering and cannibalizing the body of a twenty-one-year-old Tynisha Ysais on the 10 April 2002. His defense was that he was under the influence of drugs. He killed the young woman with a knife. After cannibalizing her and fleeing, he was arrested the same day. The crime took place in Los Angeles, and Big Lurch was sentenced on the 7 November 2003. He pleaded insanity and intoxication, but the court did not accept his plea.

Between 1990 and his imprisonment, Big Lurch was involved in the rap music scene. He worked with various artists including Too Short, Keak Da Sneak, Mystikal and Big Bone. At the time of the murder and his subsequent imprisonment, he was working on a new album.

Big Lurch is serving a life sentence in the Californian prison system. At one stage he spent five years in solitary confinement.