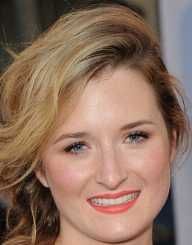 Grace Jane Gummer was born on May 9, 1986, in New York City, New York, United States. She is an American Actress who received a Theatre World Award for her Broadway debut revival of ‘Arcadia’ in 2011. She has also featured in other works including ‘The Newsroom,’ ‘American Horror Story: Freak Show,’ ‘Mr. Robot’, and ‘Extant.’ She has been active since 2008 to date and is currently thirty-two years old.

Grace Jane Gummer was born to sculptor Don Gummer and actress Meryl Streep on May 9, 1986. She was born in New York and was brought up in Los Angeles, California, and Salisbury, Connecticut together with her three siblings. She went to Vassar College her mother’s alma mater from where she studied Italian and art history.

She was also actively involved in acting during her college life. After her education, she appeared in the ‘House of the Spirits’ in 1993 alongside Streep assuming the title Clara del Valle which was a younger version of her mother’s character.

In 2008, Grace Gummer appeared in her first stage debut ‘The Sexual Neuroses of Our Parents’ by Lukas Bärfuss. She also appeared in the film ‘Meskada’ in 2010 taking up the role of Nat Collins and later featured in ‘Bashert’ as Abby alongside Paulo Costanzo. In 2011 she played a role in ‘Larry Crowne’ by Tom Hanks as a student in a class tutored by Julia Roberts.

Later in 2011, she appeared in Tom Stoppard’s play revival of Arcadia as Chloe Coverly performed at the Ethel Barrymore Theatre in New York. On March 26, 2012, she played Katie Rand in the episode named ‘The Coup’ of the television series titled ‘Smash.’ She displays the art of kindness and of a peaceful child who attempts to reunite her divorcing parents.

Grace Gummer also featured in the 2013 television series titled ‘Zero Hour’ and later in the HBO series ‘The Newsroom’ in the second season with its last episode premiering on July 14, 2013. She also appeared in the 2014 and 2015 CBS show ‘Extant’ co-starring Halle Berry in the two seasons. On January 29, 2016, she took up a role in the USA Network series ‘Mr. Robot’ featuring as FBI agent Dominique "Dom" DiPierro.