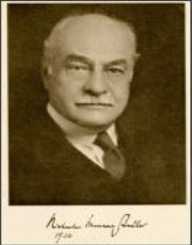 Nicholas Murray Butler was also the president of the Carnegie Endowment for International Peace and served in several other positions. Butler’s popularity was so huge that The New York Times each year printed his Christmas greetings nationwide.

At the university, Nicholas Murray Butler was a member of the Peithologian Society. His excellent academic performance and level of intelligence gained him the nickname Nicholas Miraculous from Theodore Roosevelt. He also had some further studies in Paris and Berlin, where Nicholas Murray Butler met his future lifelong friend Elihu Root, who would later become a Secretary of State.

Nicholas Murray Butler started his career in the Columbia philosophy department as a staffer in 1885. Two years on, he co-founded Grace HoadleyDedge and later a President of New York School for Training Teachers. The school was then affiliated to the University of Columbia had a name change to Teacher College, Columbia University. Butler continued his career as an educator by serving as a lecturer at the John Hopkins University, Baltimore from 1890 to 1891. With education being dear to him, he accepted an appointment onto the New Jersey Board of Education and was one of the brains behind the formation of the College Entrance Examination Board.

His effort was recognized with an honorary membership to the New York Society of the Cincinnati. Nicholas Murray Butler was also named after the philosophy library of Columbia, and posthumously the academic library formerly known as South Hall was also named Butler Library in his honor. Several other facilities were named after him for his diligence and contribution to the University Columbia and the society.

His political activism was massive within those times his active influence helped in the Repeal of Prohibition in 1993. Butler had always believed that Prohibition hindered the development of America and was one of the greatest mistakes. Nicholas Murray Butler was part of the Carnegie Endowment Peace Conference in London which considered the use of gold internationally.

Leadership And Other Works

Nicholas Murray Butler was married to Susanna Schuyler in 1887 and had a daughter. After the death of Susanna in 1903, he married Kate La Montagne in 1907. He became partially blind in 1945 aged 83 and died in 1947. He was mostly seen as arrogant and hostile to persons who disagreed with his philosophies to the extent of dismissal if his ideas were questioned. One of such persons who suffered from Butler autocracy was classical scholar Harry Thurston Peck and Joel Elias Spingarn, a civil right pioneer.