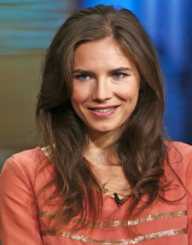 Amanda Knox was born on the 9 July 1987 to Curt Knox and Edda Mellas in Seattle, Washington State.

Amanda Knox was a pupil at Seattle Preparatory School, and after graduating in 2005, she enrolled at the University of Washington. In 2007 she went to Perugia, Italy to spend an academic year studying Italian.

Arrest for Murder in Italy

While studying in Italy, Amanda Knox worked part-time as a barmaid. She met  Raffaele Sollecito at a concert. Shortly after they had begun dating, Knox’s housemate British student  Meredith Kercher was found murdered. Within a week of the murder, Knox and Raffaele were arrested. The press became focused on Knox’s good looks as well as her alleged promiscuity, and she became the subject of tabloid fodder.

Her family insisted that she was an innocent twenty-year-old and her stepfather said that he had had reservations about allowing the young, inexperienced girl to travel to Italy alone. To further muddy the waters, someone produced a short story about drugs and rape that Knox had once written. There was a lot of conflicting evidence, and the trial was sensational, receiving worldwide coverage.

In 2009 Sollecito and Amanda Knox were found guilty and sentenced to prison. Knox was handed down a twenty-six-year term, and Sollecito got twenty-five years. A third person, Rudy Guede who lived in an apartment below Knox and her housemates was sentenced to sixteen years for murder, and sexual assault as his DNA was found at the scene of the crime. Knox returned home to Seattle when her conviction was overturned in 2011. In 2013, the highest court in Italy ordered a retrial, and in 2014, the three were found guilty a second time. Then in 2015, on final appeal, Knox and Sollecito were exonerated.

Return to the USA

Amanda Knox returned home in 2011 and resumed her studies. She also started working on a book: Waiting To Be Heard: A Memoir. The proceeds of sales paid for legal fees. Meanwhile, her family was almost ruined financially by the ordeal.

She works as a freelance writer.

Netflix made a documentary about her entitled Amanda Knox.

Amanda Knox is interested in helping others who have been through a similar ordeal and is involved in the Innocence Project and other groups.