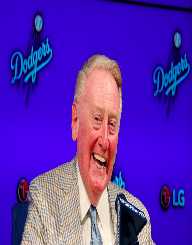 Vincent Edward "Vin" Scully is a retired American Sportscaster. He was born on November 29, 1927. He had sixty-seven seasons with the Los Angeles Dodgers from 1950 to 2016. This was the longest period for any broadcaster with one team in professional sports history. Only Tommy Lasorda beat this record by one year.

In his final year, Scully cast most of the Dodgers home games in SportsNet LA and KLAC radio. According to fan rankings, he is considered to be one of the greatest baseball broadcasters of all time. Scully retired in 2016.

Vin Scully was born on November 29, 1927, in The Bronx. He grew up in Washington Heights, Manhattan. He started working while still young; he could deliver beer and mail, push garments racks as well as clean silver in the basement of the Pennsylvania Hotel, New York.

His family struggled to raise him. The father, Vincent Aloysius, was a silk salesman while the mother, Bridget, was a Roman Catholic homemaker with Irish descent. When Scully was four years old, his father died of pneumonia. His mother married Allan Reeve, a sailor of English origin.

Vin Scully discovered his growing interest in baseball when he was eight years. He watched the second game of 1936 World Series and sympathized with the defeated New York Giants. He would frequently visit the Polo Grounds and became an ardent supporter of the Giants.

He decided at eight years to become a sports announcer after he realized joy from listening to commentaries from the radio.

Vin Scully was enrolled at Fordham Preparatory School in the Bronx. Scully did well at his preliminary studies and proceeded to the University. He joined Fordham University.

Vin Scully acceded to the United States Navy for two years after which took up a role as the student broadcaster and journalist at Fordham University. While here, he earned a degree and also assisted in the foundation of an FM radio WFUV. He also served as the assistant editor for Volume 28 of "The Fordham Ram." He also played at Fordham Ram Baseball team and gained experience in broadcasting.

In November 1949, Vin Scully started working at CBS Radio Network by Red Barber. He was passionate about the job, and this earned him favor from his employer. In 1950, he collaborated with Barber and Cornelius Desmond and became one of the announcers for Brooklyn Dodgers' Radio and Television Booths. Barber later left the team after a salary dispute. Scully filled up the vacancy left by Barber becoming the youngest man to broadcast a World Series, a record yet to be broken. He performed his duties excellently, and this earned him a leading announcer position in the team.

In 1957, Scully announced the Dodger game in Brooklyn just before the club changed locale to Los Angeles. He also moved to Los Angeles and continued as their chief announcer announcing the first game of 1958 season.

His star continued to rise, and the fan base grew bigger each year. As a result, Scully was offered the lead play-by-play announcer by the New York Yankees. He rejected the offer and remained with the Dodgers.

Vin Scully tried his hand in football. He announced the National Football League Games for CBS Sports from 1975 to 1982. He amazingly did well even in football. He furthered his career by serving an announcer in the Tennis and golf tournaments.

In 1977, Scully called Baseball on CBS Radio until 1982 in the All-Star Game. He announced the World Series from 1979 to 1982, together with Sparky Anderson. In 1981 NFL season, Pat Summerall was awarded a play-by-play commentator over Scully. The growing disagreements between him and CBS saw him ditch CBS for NBC in 1983. He took up the position of NBC's lead television broadcaster from 1983 to 1989. He called for four National League Championship Series, three World Series and several other historical moments.

During his tenure with NBC, he maintained a close association with Dodgers, and he broadcast games for Dodgers Television Network.

During the 1989 season, Vin Scully suffered from laryngitis leading to an inability to announce games. NBC lost rights to cover major tournaments to CBS. His contract expired, and he now concentrated on Dodgers. He announced the 1990 World Series with the CBS. He worked with the CBS for seven years He also did announce other games including Annual Skin Games for ABC (1991-1996), the Senior Skins Games for ABC (1992-2000) as well as several golf tournaments.

In 1999, Vin Scully worked as the Master of Ceremony for the MasterCard's Major League Baseball All-Century team. He was reappointed in Dodgers during the 2008 baseball season. He called for games in the new KLAC, KCAL-TV and Fox Sports West. In 2014, Scully returned to the Dodgers booth for season 65 as the team's broadcaster. He announced his last game in his career on October 2, 2016. This marked the end of his career with the Dodgers.

1976: Voted the "Most Memorable Personality" in history.

1982: Received the Ford Frick Award from the National Baseball Hall of Fame

Scully was inducted into the;

In 2009, he was awarded the Sportscaster of All-Time as well as the Ambassador Award of Excellence from the LA Sports and Entertainment Commission.

In 2013, Scully was honored as a Grand Marshal for the 2014 Tournament of Roses Parade.

Vin Scully is a Roman Catholic. He married Joan Crawford in 1957. Her wife died in 1972 from an accidental medicine overdose. He married Sandra Schaefer in 1973 with who he had two children. They had a son who died at 33 years due to a helicopter accident.